How many years living of the land turtle

Land turtle is quite popular among Russian pet owners view Pets, which until now is still considered rather exotic. In our country, common only a few species of turtles, so only a few animal lovers know that worldwide there are about 40 species with different life expectancy. 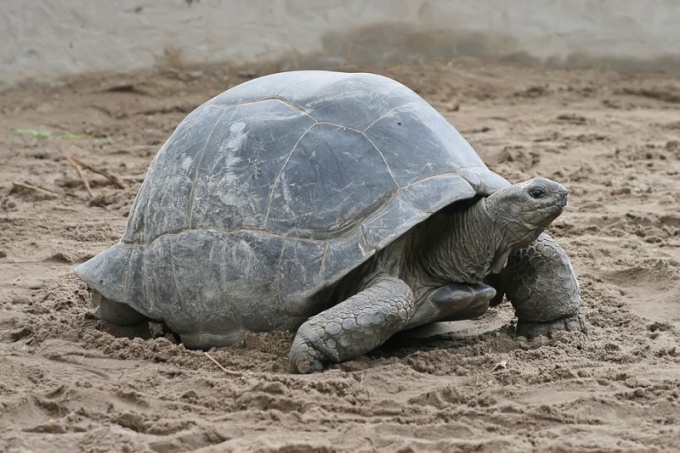 What kinds of turtles live on the Land

This separation exists on our planet tortoises mostly consistent with the geographical origin:
American turtles (coal, Argentine, wood and ivory), which have the length of the carapace from 25 to 122 inches and inhabit the territory of South America and the Galapagos Islands;
Asian (brown and depressed) with the length of the carapace in 30-60 cm. They live in the tropical forests of South and Southeast Asia;
- tortoises (star-shaped, leopard, African spurred, Burmese), which have a shell distance of 25-70 centimeters and live in the steppe regions of Africa and South Asia;
Indian (yellow-headed Indian, Indian and telebista) with carapace length of up to 30 centimeters and habitat – South and South-East Asia;
- Madagascan tortoises (radiata, and the Madagascar keyworda) with tubular length of 40-50 centimeters. Are endemic to Madagascar;
- a giant with a length of carapace up to 120 centimeters;
the gophers (gophers of the Western desert, the Texas gophers, Mexican gophers, gophers-polygamy). The maximum length of their carapace – 40 inches, and habitat – United States and Mexico;
- Pleskodale turtles;
- elastic with the length of the carapace in adults 15-18 inches and dissemination in Kenya and Tanzania.
the spider (the spider and ploskovaty) endemic to Madagascar. Have a maximum length of carapace 15 inches;
- South African star tortoises (geometric, mottled and knobby), inhabiting South Africa;
European land (bordered by Mediterranean, Balkan and Egyptian) with a maximum carapace length of 35 cm;
- turtles-kinksy (gear kiniks, smooth);
- Central Asian turtle.

The last kind of turtle has a very interesting characteristic. Central Asian turtles can hiss like a snake-Viper.

In addition to its famous slowness, tortoises distinguished and very long lifespan. So the representatives of some species can live for 50, 100, 120 or more years, depending on belonging to one of them, as well as the conditions and quality of life.

But the leaders of all the species are considered as giant tortoises, are endemic to the island of Aldabra.

In addition, they are very rare, individual members of this species live up to 150 years.

Best known in the animal world is the turtle Advaita, who died of old age in the night from 22 to 23 March 2006 at the age 150-250 years. An important indication of the lifespan of this animal is derived from authoritative sources evidence Jogesh Barman, Minister of agriculture of the state of West Bengal in India. The official maintained that the turtle was a favorite of Lord Clive, the hero of the Seven years ' war, took part in the East India trading company. The Englishman died in 1774, and the animal lived his last few years before the death of the Lord.
Is the advice useful?
See also
Присоединяйтесь к нам
New advices