What are the types of sushi and rolls

Passion for Japanese cuisine is becoming nearly ubiquitous. Long-time and neophyte fans of exotic dishes they offer many types of sushi and rolls. To understand this diversity, the newcomer is not easy, but necessary if he was going to an Oriental restaurant or planning to be home sushi master. 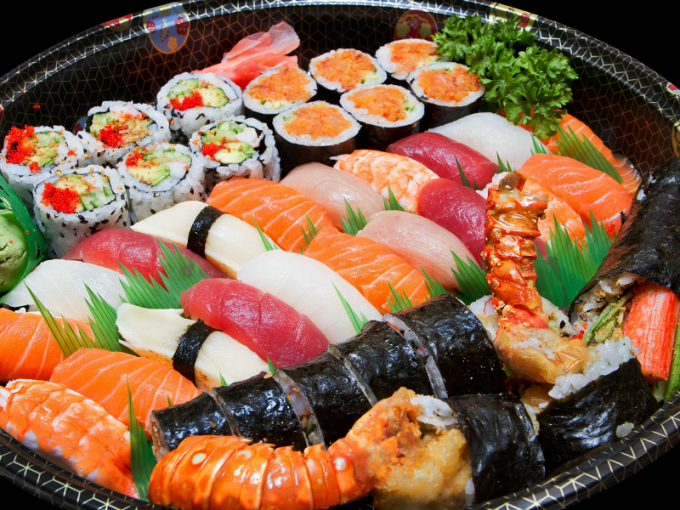 Temarizushi – a little sushi for kids. It's the same nigiri, the rice has only the substrate shape is not a cuboid, and a small ball.

The most common form of sushi, nigiri is a block of rice covered by a slice of fish, crab meat, shrimp, or Japanese omelet. If the coating is fragile and can fall apart, as for example, a strip grillowania of acne, simple design tied with a thin ribbon of nori (dried seaweed) or a pen with green onions.

The second most popular kind of sushi Guantanamo or "boat". Its basis is the rice block, but stuffing is more crumbly, so it is completely wrapped with a wide ribbon of nori, 1-2 cm towering over the pillow of rice, forming a small boat. There and then and put caviar tobiko and chopped fish fillet with spices or sauce, assorted vegetables, crab chips, etc.

Temaki – the easiest and most voluminous kinds of sushi. It is a triangular parcel of the whole leaf nori wrapped in it
slices of fish, seafood, vegetables, greens and of course rice.

A variety of rolls

Rolls in Japanese cuisine are even greater diversity than the land. They are thin and thick, and closed "inside out", simple and complex. And the options for toppings for these mini-rolls, which are widespread far beyond the rising sun, thanks to the imagination of gourmets calculated even tens and hundreds. However, the original types and the technique of cooking the rolls has been preserved.

So, the most simple and easy execution rolls – hosomaki. They are thin and are ready in just one or two toppings. As a rule, fish, vegetables or both together. There are classic combinations of components for hosomaki, this salmon and avocado, eel and cucumber, shrimp and cucumber.

Despite the fact that such rolls are rarely served in Japan, in other countries they get special love gourmands. Perhaps that is why a popular samaki are not Eastern names, such as "California" or "Philadelphia".

Sakaki – perhaps the most beautiful rolls fillings with a volume of 2-5 ingredients. Unlike the previous species, they are wrapped inside-out, i.e. rice side out. They are decorated with thin slices of salmon, sesame seeds, red or yellow tobiko caviar.

Futomaki thick rolls, stuffed with five ingredients that must necessarily be different bright colors. While one roll is easily coexist fish, shrimp or crab, omelet, vegetables or herbs, shiitake mushrooms or caviar.

Some fans of Japanese cuisine figured out how to cook your favorite meal, attending to this process. Thanks to them, appeared the so-called Western pressed sushi or SFU oshizushi ("SFU" West, "oshizushi" – press). Rice and filler layers alternately placed in a special device consisting of two parts, which when compression of the stamp and cut content on pretty flat land.

In Russia there was even more clever gourmets, which are used for cooking sushi metal ring of small diameter, usually used for Assembly as a portion of a layered salads. Enough to put it on a plate, fill half with rice, half – filling, and then gently pull out.
Is the advice useful?
See also
Присоединяйтесь к нам
New advices