The history of salad "herring under a fur coat"

Few people know that the traditional and loved by thousands of people salad "herring under a fur coat" has a political subtext. Invented this dish back in 1918, which, as you know, for Russia was a turning point. According to popular legend, "coat" is not the name of the kind of clothing, and abbreviation. 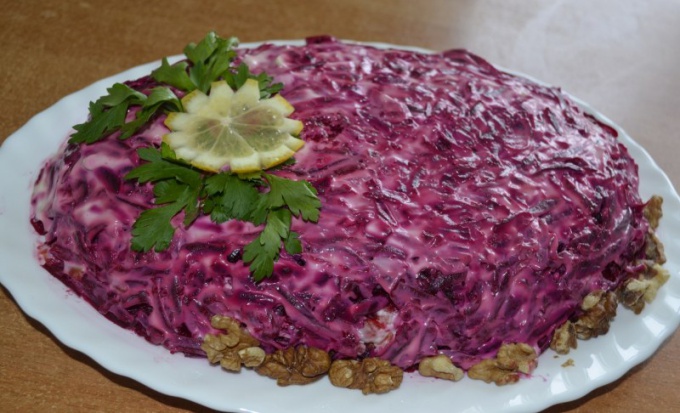 Restaurants since the mid-19th century was a favorite place of citizens. Here they drank, swore, and talked all the way to dayscialis the truth. Often, the visitors beat the dishes, started fights, accused each other of harboring revolutionary ideas and discordant chorus sang the "Internationale." Once Anastas Bogomilov, a merchant from Moscow, the owner of several popular eateries have decided that it is necessary to pacify the visitors and to make its institutions more relaxed. It happened in 1918. One of the employees of Anastas cook Aristarchus Prokoptsov decided that the easiest way to calm down the rebels if fill their stomach. But not only so, but with a hidden subtext.

According to legend, Prokoptseva came up with the idea of creation of the dish "herring under a fur coat". Herring was a symbol of the proletariat (widely available and popular product), vegetables (potatoes, onions and carrots) represented the peasantry, and beets represented the revolutionary red banner. Popular French cold sauce "mayonnaise" was a link. Why was he chosen, is unknown. According to one version it was a sign of respect to those who made the Great French bourgeois revolution, on the other – a reminder of the Entente.

The Entente, which included France, was considered as the main external enemy of Bolshevism.

Why fur coat? COAT is an abbreviation which is deciphered as: "Chauvinism and Decline – Boycott and Anathema".
Restaurants visitors quickly appreciated is a revolutionary salad. First, it was delicious. Secondly, inexpensive. And thirdly, it was a great snack for strong drinks. Due to the large number of Mayo people are less intoxicated, so there was less fights. For the first time in the menu of the restaurants that Bogomilova salad appeared before the new 1919. Maybe that's why "herring under a fur coat" and became a traditional dish for the Christmas table.

The history of the salad – a beautiful legend. How true is it, no one will ever know.

It is desirable that the mayonnaise was homemade. If you have to use the store, it is best to take the one where the fat content higher.

Once the vegetables are cooked, they need to cool, peel and turn to grate. Onions finely cut maximum. Herring fillets are cut into small cubes: not more than 1 × 1 cm. requires an Apple peel and grate on a fine grater. The dish is best to put on flat bowl. The first layer in a classic recipe is the potatoes, then herring, onion, carrot, Apple and beets. Each layer is smeared with fatty mayonnaise.

A classic recipe known to many, but every woman still makes "herring under a fur coat" in his own way. One is Apple put pickles, exclude other ingredients onions, and the third one of the layers make cheese. Some chefs seek to "elevate" the dish is herring put salmon, salmon and even seafood like shrimp and squid. Housewives also enjoy experimenting. In the Internet you can find many original recipes based on the classic "Herring in a coat", "fur Coat without herring", "Herring in a new fur coat", "Herring in a coat".
Is the advice useful?
Присоединяйтесь к нам
New advices