Where to study in Khabarovsk

Khabarovsk is quite a large scientific center. There are 17 local Universities and a further six branches in other major and reputed educational institutions. So residents don't have to go to Moscow to study, you can do it in the Khabarovsk. 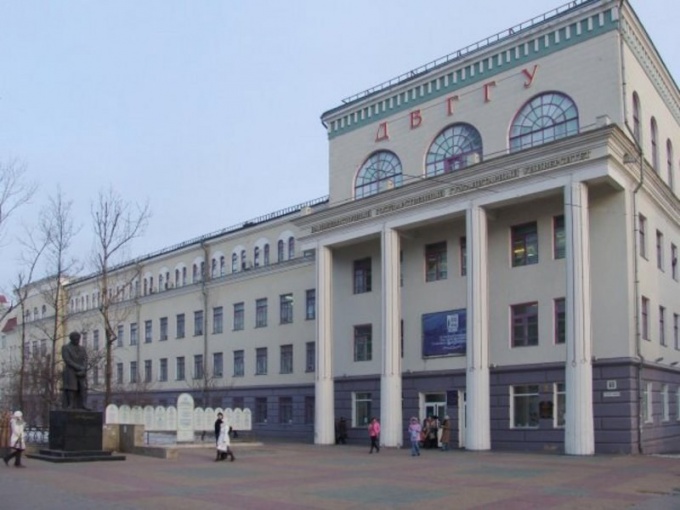 Related articles:
Instruction
1
In Khabarovsk, 20 schools, two of which with profound studying of English language. Also there are 19 colleges and technical schools, where the schools can get higher education in such occupations as railroad worker, the assistant of the train driver, mechanic, driver instructor, accountant, etc.
2
Very popular among the students uses the Khabarovsk boundary Institute of FSB of Russia. It trains officers and warrant officers of the Border service of FSB of Russia. Upon graduation all graduates become qualified as lawyers. In this University you can study both in person and in absentia and the diploma was quoted about on par with Metropolitan universities.
3
Those who love the economy goes into Khabarovsk state Academy of Economics and law. According to most experts, is the leading specialized economic educational institution in the whole Khabarovsk territory. Despite the fact that the Academy was established not so long ago, in 1993, its diploma is quoted.
4
Well, those who feel the craving for beauty, go into Khabarovsk state University of arts and culture. Students being called by the school, like its Moscow counterpart, the "sack." Here you can learn and the journalist, and screenwriter and film critic. Last year the competition was four people in place, and this demonstrates the popularity of the University.
5
Future teachers are going to study in far Eastern state humanitarian University, which was once the Khabarovsk pedagogical University. Here you can learn how regular teachers, and the teacher of initial classes.
6
We should not forget about the largest UNIVERSITY in the Far East and the Pacific state University. It houses a variety of departments: fundamental and computer Sciences, social-humanitarian, legal, Economics and management, engineering and construction, architecture and design, transportation and energy and natural resources and the environment. You can learn both at the bachelor (4 years) and specialist (5 years) and master (6 years).
Is the advice useful?
See also
Подписывайтесь на наш канал