How to play the accordion

The skill of accordion virtuosos opened this tool the way in the best concert halls in the world. At the same time folk performers often play the accordion, not even knowing the notes. Of course, in order to perform the most difficult classical works, takes a long time to learn, and a good teacher. But to learn to play simple melodies you can own. 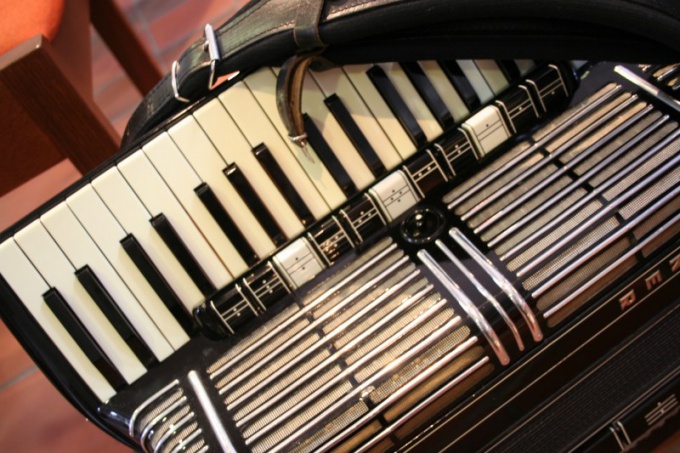 Related articles:
You will need
Instruction
1
Many folk musicians choose melody and chords by ear, the benefit of the accordion design allows it. But it will go much faster if you learn the notes and simple tone sequence. Chords in any work placed in a certain order. In this sense, the push button mechanism of the accordion and other instruments is arranged very rationally. Let's start with the right hand. Learn the notes and their location on the keyboard. It is very similar to piano. The sound octave "to" located below the group of two black keys, "d" is between two black keys, "mi" above this group, etc. Keep in mind that the accordion at the top and the bottom octave are most often incomplete.
2
Learn to play simple melodies with one hand. Better if they are written in a major key. Carefully watch the movement of the bellows. The music is normally indicated when fur needs to stretch or shrink. Keep the air in the instrument was always full compression is possible only in some cases. Learn to push the fur evenly. Do it slowly at first, then try it in different tempos.
3
The accompaniment of many musical works you can imagine in the form of a scheme "T–S-D-T", where T is the main chord, or tonic chord, S – chord built on the subdominant, i.e. in the fourth stage, and D is the triad built on the fifth degree, or dominant. Learn to identify steps. So, in C major the subdominant is the note f, and the dominant salt. It is very helpful to learn the letter designations of different keys, it will help when reading cifrovik. Touch of a button accordion. Find the middle of the row, furthest away from the bellows. Here you will find a small notch. This is the ultimate sound. Middle buttons in the remaining rows is the chords are built from notes to. Accordions come in different designs, so click each of these buttons and listen for which chord it gives – one octave, C major, C minor or seventh chord from the sound.
4
Take the circuit of fifths circle. The fact that all the buttons of an accordion are arranged in accordance with this scheme, so that on one side of the button "to" will be "C" and "d" (or "si" and "C sharp"), and "FA" and "Sol". By the way, they too can be marked with icons that easily palpated. Try to play a simple square according to the scheme. If you replace the legend these sounds, the order will be like this: "do-FA-Sol-do", "C-F-G-C". Make the same scheme as for other keys, at least for the most common.
5
Join the accompaniment with the melody. Where to change the chords shown in ciprovci. As soon as you get a quick change of chords, try a little to perfect accompaniment. For example, in several places instead of triads fifth stage to take the dominant seventh chord occurs.
6
Look closely at the fifths circle. Also, the collection schemes. You will see that each major key corresponds to the parallel minor with same number of key characters. For example, for C major it would be La minor, Sol major – e minor, d major, b minor, etc. there are different types of minor – natural, harmonic and melodic. It is important to consider when selecting accompaniment. For example, in popular songs often other applies the harmonic minor with the raised seventh degree. If you try to build the accompaniment chords already on the proposed scheme, the natural a-minor for tonic minor chord going to d major and e minor, and a harmonic chord of the fifth degree is major.
Is the advice useful?
See also
Подписывайтесь на наш канал