How to charge autoambulator without charger?

Difficulty to start the car, the motorists occur frequently. In most cases, the problem becomes serious failure, and defective or dead battery. Went to the car, simply charge the device. However, the charger is not at all. And besides, in order to understand the need to charge for about a day. But experts state car owners (especially beginners), because there are a few ways you can charge the battery without charger. 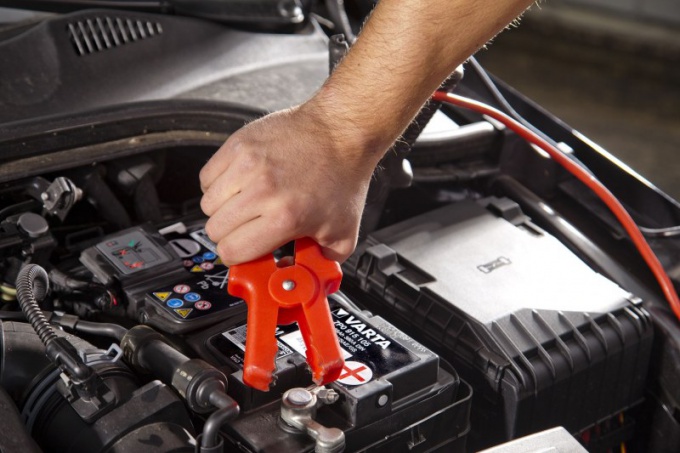 Related articles:
This is a car battery not only provides power to the starter, but also is a source of accessory power (especially in those moments when the generator could not provide the right amount of energy). Accordingly, if the battery is depleted, i.e., loses all its energy, can be quite a serious problem. To charge the battery without the charger, is not so difficult. The main thing is to follow the experts and be based on the number of runes required for this device.

The most common way to charge your battery without a special device, popularly called "light". Its essence is quite simple: the battery can be recharged with the help of the working battery of another car. Another car with the motor arrives close to your. Open the hood as the car-pomoshnika and at home. Then, using special leads with plugs on the ends connect this device to your battery, the other end to an operating device of the second machine. It only remains to turn the ignition key of his car. Current will run and the machine will start. To turn off your car immediately after this not - the battery needs to work to recharge. However, after that, preferably, the battery still charge at home on the charger or to change it at all.


Alternatively, you can remove the battery with another car and bring it to his car. Then connect them in the same way - through a special wire. The car will start.

Another option how to recharge a car battery without a special device, only suitable for cars with a manual transmission. It's called "the pusher". Provided by this method due to the fact that the generator of the car after the last trip remains a small charge, which is enough to initiate the generator's action. You need to push the car, simultaneously turning the key in the ignition to the charge went off, and the battery is "alive." Alternatively, using the rope to be picked up by another machine. She needs, a little towing, pull stuck cars ahead. Generator in most cases, will respond. Next to the battery charged to the proper level, drive the car on the roads as long as possible. But after that, it is advisable to check the General condition of the battery - as far as it still working. Or, if possible, charge it with a special device.

Sometimes folk artists manage to combine two methods: the battery plug it in and wind up with the pusher.

Another option is charging your battery without a special device assumes the presence of a second functional device. To do this, first remove your battery, put working. Then start the car. Once it is working without turning off the car, remove the battery and put his in place. In the same way - drive it as long as possible.

Another option will save you if you get stuck in a remote area where there is no help. In this case you will save a typical small battery with a capacity of a few Volts. Fit and one that is in the flashlight, and the one that is in a mobile phone or laptop (of course, also assuming that she's not dead). You need to open the hood and find the wire that goes from the battery to the generator so that when the enable auto signal on the excitation of the latter. Approximate location - from bulbs, to signal a problem with the battery. This wire must be broken to insert the battery. Next, push the car hard, the battery at this moment should make the generator to work, i.e. to develop a voltage sufficient to enable it to send a signal to the battery. It is best to push the car downhill to make it faster overclocked. When you reach the desired effect, quickly hop in the car and turn the key in the ignition. The principle in General is similar to that used in the plant of the machine with the pusher. When the vehicle starts, remove the battery, even without turning off the car.

In the case when the battery freezes in the cold, one way to make it work - just put in warm place and let it warm up entirely. In some situations, the battery is put in warm water. However, it is better with more liquids better not to experiment, as it is fraught with other problems that may be more serious than simple battery discharge.

Still as the variant can to try to shake the battery to all the liquid was distributed more evenly. The only thing to note - never attempt to look into the battery, flashing his lighter. the result will be unpredictable and irreversible.

Prevention of discharge of the battery

To not get a nasty surprise in the form of a dead battery, it is better to attend to the prevention of such problems. It's enough to monitor your car. Remember that the lifespan of a car battery on average about 3 years after it is better to change, because of possible surprises.

In addition, it is desirable to regularly check the battery level by using a portable device. Such a device is cheap - about 500 rubles. This method will save you from unpleasant surprises at the most inopportune moment.

Another method suitable for this cold time of year, especially if your car is a long time laid up. Fairly regularly - once a day or two to start the car and some time to let it work. Alternatively, you can go through the neighboring yards. This will give the battery the necessary nourishment and allow it to function longer. Alternatively, you can remove the battery and take it home to heat.
Is the advice useful?
Подписывайтесь на наш канал