How to tie a scarf on your head

The scarf looks very nice on the head girl. Just seems a sort of Russian beauty in a handkerchief. While there are many different ways that allow you to beautiful tie a scarf on the head and emphasize femininity. 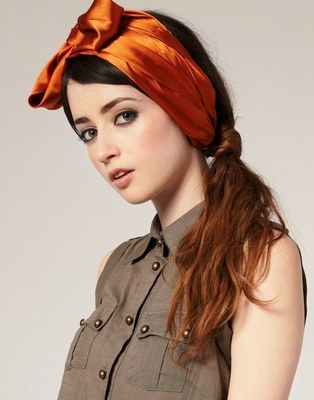 Related articles:
Instruction
1
Tie the scarf on the head design. To do this, throw a scarf on your head and take the ends back, his forehead leave half open. Next, tie the ends in a knot or a bow.
2
Can use the scarf as a beautiful bandage on the head. To do this, take a handkerchief for his triangular tip and alternately roll it into a tube in the direction of its wide base. The strip of gusset plate should be of a width equal to 5 centimeters. Next, put on the head of the resulting bandage, wrap the ends back and tie.
3
Make the buckle out of the gusset plate in the form of eight. To do this, take a handkerchief and put it on the neck, so the ends of the left front. Then take a regular buckle and thread through the hole in each end of the gusset plate. Grasp the ends of the scarf and thus raise it on his own head. Then tie the ends of the scarf under the hair. Align the pleats formed in the scarf and fix your hair.
4
Tie the scarf in the usual way. Put it on your head to the ends of the scarf hanging down. Then tie the ends of the scarf under the chin.
5
Wrap a scarf beside the hair. This method of using scarves can brightly highlight your individuality. Make a ponytail at your crown and secure it plain, thin band. Then wrap around the tail several times a scarf and tie from the ends of the bow.
6
Weave a scarf in a braid. When braiding a braid or spikelet, simply wrap the scarf around the base of the two strands. Then begin to weave the braid with a scarf, at the end of the weave hairstyle you tie the ends of the scarves a beautiful bow.
7
Tie a headscarf in the form of a rose. To do this, take the scarf and roll it into a tube. Then transfer it folded over her head, so she was a little bit below the nape of the neck. Next, pull the ends of the scarf forward to the middle of the forehead. Then tie the ends of the scarf into a little bow so that the ends of the bow forward. Correct hair. This method of tying scarves will be best suited to women with short hair.
Note
Tying a scarf on the head. 1. Fold your scarf diagonally several times in a narrow sash 2. Wrap around your head tips back so that the middle was on her forehead 3. Tie a scarf knot under the hair, sdade, and the ends move forward, the shoulder Can displace the product a bit in a circle to make a small asymmetry.
Useful advice
Knowing how to tie a scarf beautifully and effectively, you can easily arrange the necessary accents to liven up the image, filling it with new meaning and mood, and completely transformed. The most popular way socks – tying scarves around the neck, but a flick of the wrist modest handkerchief can be turned into a stylish hat, an exclusive decoration for handbags, unique bracelet, the original top or a colorful belt.
Is the advice useful?
See also
Подписывайтесь на наш канал