How to build a paraboloid

When I rotate the parabola around its axis turns out body shape called a paraboloid. The paraboloid has several sections, among which the primary is a parabola, and the next one is the ellipse. When building takes into account all characteristics of the graph of the parabola, which depends on the shape and form of a paraboloid. 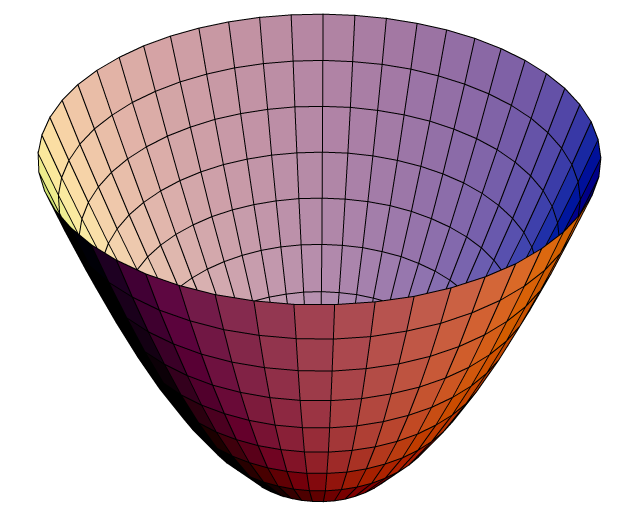 Related articles:
Instruction
1
If you rotate a parabola 360 degrees around its axis, it is possible to obtain an ordinary elliptic paraboloid. It is a hollow body isometric, sections of which are ellipses and parabolas. Elliptic paraboloid defined by the equation:
x^2/a^2+y^2/b^2=2z
All the main sections of the paraboloid are parabolas. To section the planes XOZ and YOZ are obtained only of a parabola. If we draw a perpendicular cross-section relative to the plane Xoy, we can obtain an ellipse. Moreover, the cross-section which is a parabola are defined by equations of the form:
x^2/a^2=2z; y^2/a^2=2z
Cross-section of the ellipse are defined by other equations:
x^2 /a^2+y^2/b^2=2h
Elliptic paraboloid if a=b becomes a paraboloid of revolution. Construction of paraboloid has a number of some features which must be considered. Operation start with preparing the basics - drawing graph of a function.
2
In order to begin to build the paraboloid, we must first construct a parabola. Draw a parabola in the plane Oxz, as shown in the figure. Set future paraboloid certain height. To do this, draw a straight so that it touches the top points of the parabola was parallel to the axis Ox. Then draw a parabola in the plane Yoz and draw a straight. You will receive two paraboloids plane, perpendicular to each other. After that, in the plane Xoy draw a parallelogram, which will help to draw the ellipse. This parallelogram write the ellipse so that it touched all sides. After these changes, remove the parallelogram, and will remain three-dimensional image of a paraboloid.
3
There is also a hyperbolic paraboloid, which has a more concave shape than elliptical. Its section also have the parabola, and in some cases, hyperbole. The main section in the Oxz and Oyz, like elliptic paraboloid are parabolas. They are defined by equations of the form:
x^2/a^2=2z; y^2/a^2=-2z
If you hold the section relative to the axis of Oxy, you can get a hyperbola. When you build the hyperbolic paraboloid, consider the following equation:
x^2/a^2-y^2/b^2=2z is the equation of a hyperbolic paraboloid
4
Original build a fixed parabola in the plane Oxz. In the plane Oyz, draw the moving parabola. After that, set the height of the paraboloid h. To do this, select on a fixed parabola two points that are the vertices of two parabolas moving. Then draw another coordinate system O x y', to strike the hyperbola. The center of this coordinate system should coincide with the height of the paraboloid. After all constructions draw those two the moving parabolas mentioned above so that they touched the extreme points of hyperbole. The result is a hyperbolic paraboloid.
Is the advice useful?
See also
Присоединяйтесь к нам
New advices