How to build a Evol

Remember how small but fearless Pinocchio won the most terrible Karabas-Barabas? The villain caught his long beard in a knot when running over a wooden man around the tree. The trajectory described by the Director of the puppet theatre – the involute of a circle or flattened circle. The processed involute teeth of gear wheels and gears. So to be able to build such a curve should every engineer. 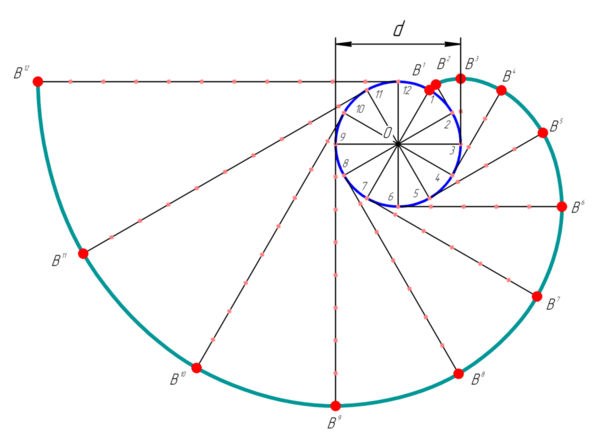 Related articles:
You will need
Instruction
1
Place a piece of paper so that the long side was laid along the edge of the table. Mentally divide it horizontally and vertically into 4 parts. About the middle of the upper right part put a point O. the Compass, draw a circle of a given radius, with its center at the point O.
2
In the upper part of the circle, somewhere in the 12 hours put a dot and label it figure 12. In point 12, place a compass, the distance between the legs which is equal to the radius R of the circle. Make the compass notches on the circumference. The notch on the right indicate 2, and the left - 10. In the same way, make the incision from points 2 and 10. A notch down from point 2 to point 4 and down from point 10 to point 8. From point 4, similarly constructed notch - a point 6.
3
Connect the dots 12 and 6 with a straight line. And build on it using a square the perpendicular passing through the point O. the Point of intersection of the circle and perpendicular to the left indicate the digit 9, and the right figure 3.
4
The notch on the circle made by a compass from point 3 at the top mark with a number 1, and the bottom – 5. And the incisions made from the point 9, – figures 11 and 7.
5
Each numbered point on the line segment connect center of the circle. The end result is a circle that is broken, like a clock into 12 equal sectors.
6
From the point 12 to the left, construct a tangent to a circle, i.e. a line perpendicular to the radius. Similarly, take tangents through all other points.
7
Calculate circumference by the formula: L=2nr, where π≈3,14. And find the 1/12 part of the circumference of a circle: Lₒ=L/12.
8
From the point 12 at a tangent put a period equal to 11•Lₒ and set point B12.
9
From point 11 at a tangent put a segment of length 10•Lₒ. Put a point Q11.
10
Point-10 – segment 9•Lₒ. Put a dot at 10. And so on. Point 1 and point B1 coincide.
11
Curve connect the points B1, B2, ... B12. The curve is the involute of the circle.
Note
The greater the value of N you pick, the curve will turn more precisely.
Useful advice
To build evolvente a circle can be divided not only 12, but any other number of equal parts N, where N>4, and Lₒ=L/N.
Is the advice useful?
See also
Подписывайтесь на наш канал