How to connect the foot petal spokes

The foot petal is done as a part of the sock. Before you start knitting traces, it is recommended to master the technique of knitting socks is much easier to work. The transactions can be linked in three ways. 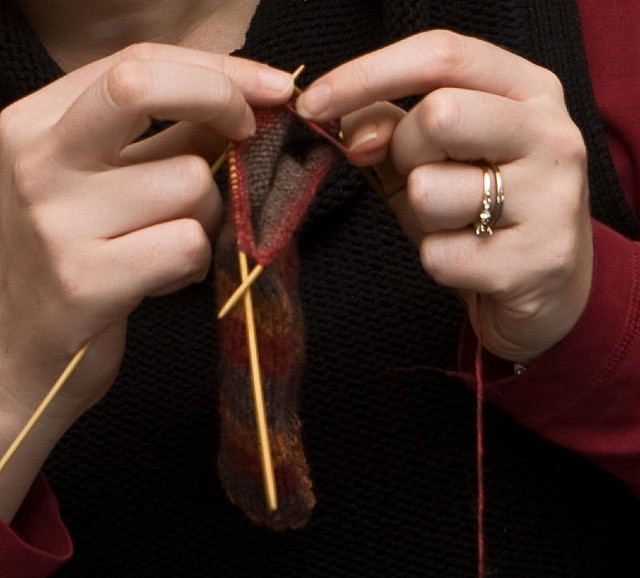 Related articles:
Instruction
1
Knitting podslednika first method begin with a heel doing it the classical way. To perform a live canvas heel recruit the required number of loops and the height of the heel is knit straight fabric. At the edge forming a heel, after typing loop on both needles. Next, knit the fabric in two directions (forward and reverse) to the toe, and then recruited to the upper part of the toe as many loops as we need and on four needles, knit the toe.
2
The second method performed the product of the front surface from the center of the heel. To complete the product from the centre recruited eight loops and four spokes distributed in two loops. Knit in a circle, adding in each row on one loop on the second, fourth spokes. Knit air loop, making the loop before the last left turn. Accordingly, the first, third knitting knit air loop, making loop after the first right turn. Continue knitting, adding the above method hinges on every second row, once on each of the spokes will be at seven loops. Typing on each spoke for thirteen loops in the third or fourth spokes continue knitting straight fabric up to the toe (24), and on the other two spokes of a closed loop. When you get ten loops top, knit in a circle, performing a toe classics.
3
In the third case, the footsies are made using colored ornament, the front surface. Recruited 33 loops of red thread. Knit two rows. Then lead the white yarn and knit to a height of 11 rows of straight tracks.
Formed heel promazyvanie the two loops together at the beginning and end zones of the Central part (11 loops). Recruited through the edge loops and knit 22 number of smooth cloth. Next, type 11 loops in the front row, to form the upper part of the toe and 11 rows of knitting in a circle. Then the classic way diminish the loop. It remains only to process binding the upper part of the podslednika (edge) and, if necessary, to insert the elastic.
Note
Answer: the Master class of knitting socks on two needles Here's another option That's even workshops, even live, not only for Russian Here's another description of the courses of knitting. In many countries, shoes for kids and knit socks that way — just two spokes.
Useful advice
The ways of knitting the foot petal spokes. With this method of knitting podslednika begins with a heel that vivaselecta the usual classical way. Along the side edges should form a heel, for this pre-dial loops on both needles. Then link the podslednika in two directions: to the contrary, and right up to the toe, then get to the top of the toe podslednika the number of loops that you need.
Is the advice useful?
Подписывайтесь на наш канал