How to boil fresh mushrooms

Boiled mushrooms - perfect pieces for the winter. How pleasant in winter to cook mushroom soup, or fried with potatoes, or even make fresh mushroom soup. They should be stored in small portions in plastic bags, which will save you space in the freezer. 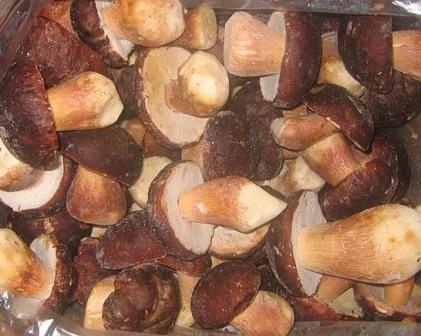 Related articles:
You will need
Instruction
1
Cleaned mushrooms should be thoroughly washed from the sand and remaining dirt. Then you need to take any suitable container (large pot, bucket or bowl), put the mushrooms and fill them with fresh running water. Top or press big plate to the emerged fungi were also under water. Soak the mushrooms need an hour and a half at least to otmok all non flushed sand.
2
To get the mushrooms from the water, rinse them again in clean water. Be cut into small pieces or boil them whole is a matter of taste. In a clean pot with a volume of about 3 liters boil 1.5 liters of water, put in mushrooms and reduce heat. Salt a little, put peas pepper, garlic (a whole head) and leaf of black currant. Cook mushrooms need to simmer for 15-20 minutes.
3
Boiled the mushrooms carefully remove the colander and allow to cool slightly.
4
By themselves, boiled mushrooms are hardly a finished dish, most likely stage before subsequent production: salting, marinating, freezing in the winter.
The plain option - freeze. Taking out a billet out of the freezer, they could also be cooked in any way.
To freeze mushrooms, place them in small plastic bags, medium-sized portions - about a pound. Make sure that bags do not remain the excess air. Place bags neatly in the freezer. Store blanks in a freezer you no longer.
Thus it is possible to harvest many types of mushrooms: white, aspen, boletus, mushrooms, flap mushrooms and veshenki. The only exception is pickles, as after cooking they can't be eaten because of bitter taste.
Immediately after thawing boiled mushrooms can be prepared by any method: in a soup or roast with potatoes, as a filling for pies or pancakes.
5
The broth after cooking mushrooms in no case do not throw away. Such a hearty and rich soup you can cook a delicious soup or make a sauce for meat or duck.
You can also use the sauce to save for later, and overflow it in a small plastic bottle, cover tightly and put in the freezer. After a short thawing it can be used directly, thus at any time of the year you will be a fresh mushroom broth.
Note
Do not salt the mushrooms generously too, as later on, when you cook, you accidentally oversalt a dish.
Is the advice useful?
See also
Подписывайтесь на наш канал