How to determine the direction of the velocity

Speed characteristics of the movements of the body, characterizing the swiftness of its movement, that is, the distance traveled by them per unit time. This parameter is a vector, and therefore has not only the magnitude but also the direction. To determine the direction of the velocity is required in a number of physical tasks.

Related articles:
Instruction
1
Speed is one of the characteristics of motion of a material point. It expresses the distance traveled by this point during a specific period of time. Distinguish between average and instantaneous speed and uniform and non-uniform motion.In uniform motion velocity not changes with time, which facilitates the determination of the direction of this velocity vector by. The vector average velocity is the ratio of the increment of the radius vector to the time interval:[v]=?r/?tНаправление the radius vector ?r coincides with the directionm of the average speedas shown in Fig.1, as the point is moved from point M to point M1. This condition is observed only by the uniform motion of a point. 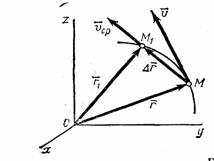 2
Instantaneous velocity is calculated when ?t tending to zero. This is a vector quantity equal to the first derivative of the radius-vector on time. It is calculated as follows:v =|lim ?r/?t|=ds/dt
?t>0Вектор instantaneous velocity is tangential to the trajectory of the MM1. Integrating the last expression for ds gives:s=v?dt=v*(t2-t1)=v*tПоследняя formula applies in the case of uniform motion, when the condition of the problem given time.
3
The direction of the velocity can only be computed by coordinate method, since it is a vector quantity.If the task is assigned to x and y coordinates are shown, and indicated the projections vx and vy may be determined as a numerical value speedand its direction. The vector velocity v in this case is the diagonal of a square formed by two projections. Consequently, the velocity is:v= sqrt(vx^2+vy^2), where tg?=vx/vy (see Fig.2)it Should be noted that in real conditions on the moving body acts a number of factors: friction, gravity, etc. In some tasks, the influence of these factors can be neglected, in others at least some of them should be considered mandatory. 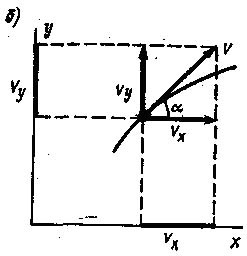