How to make a game "field of miracles"

To make the game "Field of miracles" with his own hands is not difficult, it is enjoy playing both children and adults. Fond of the game and school teachers who use it as a didactic method. 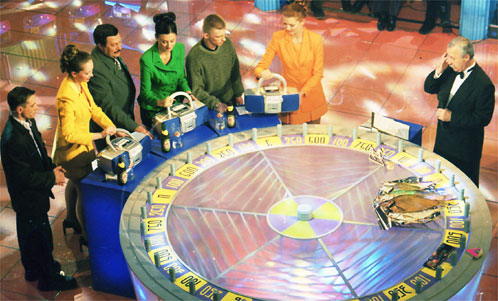 Related articles:
You will need
Instruction
1
First and foremost, make a drum: to do this, divide the circle into sectors, and the sign of the value for each cell. In addition to the prize amounts, provide additional sector "zero", in contact with which the turn passes to the next player, the sector "bankrupt", when all players points are reset, the sector "plus" that allows you to open one letter and the sector "x2" multiplying glasses twice. Don't forget about the "win" field, which allows the player to guess where is the prize and get it.
2
The remaining fields indicate the prize amounts of different values. Then cut out several identical black squares that will cover the letters of the hidden word.
3
As spinning the drum at home is problematic, you can just use a baby blue with attached arrow.
4
In the game plays up to 4 people, with a moderator who keeps score and records the amount of the winning players. The word written on a blank sheet of paper, closed black squares, and the game begins. If the house is a drawing Board, use her, writing her letters and shielding their squares.
5
It is important that they are well behaved and will not come loose during the game. The rules are simple and known to all, winner is the one who will be the first to call the hidden word. Therefore, spending a night on a device of the playing field, you can play it to players of any age, because the complexity of the game is determined by the complexity of the hidden word.
Is the advice useful?
See also
Присоединяйтесь к нам
New advices