Viktoria Aleksandrovna Komova at seventeen years is a pretty successful Russian gymnast and has the status of honored master of sports of Russia. Victoria won the silver medal at the Olympics in London. This fragile-looking girl managed to get a huge number of titles. 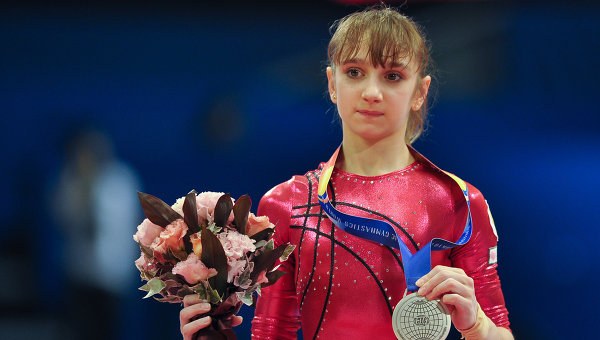 Viktoria Komova was born on 30 January 1995 in the gymnastics family. Victoria's mother (Vera Kolesnikova) is an Honored master of sports in gymnastics, father (Alexander Komov) - master of sports in gymnastics. Mom is beginning to give a five-year Vike first lessons. When she was seven years old, Vera Kolesnikova led her to a successful coaching Duo, Olga Bulgakova and Gennady Elfimov.

In 2008 at the international competition in Saint-Jose Victoria was third in the all-around, losing the first two places Samantha Shapiro and Rebecca Bross. But for the Cup of Voronin this young athlete had no equal in floor exercise, all-around and vault. At the world championship among juniors, held in Japan, Victoria has managed to win five medals: three gold (bars, all-around, beam), one silver in jump and a bronze for floor exercise.

In 2009 hosted the European youth Olympic festival in Finland. This time Vika didn't win a medal only in the floor exercise, where he took sixth place. But she has gained three gold for the all-around, team competition and uneven bars, silver for exercises on the log, and bronze for vault.

In 2010, Victoria was at his age in the championship of Russia and have become favorites among women. In the first exercise Vika Komova took silver, but on the balance beam and the uneven bars she was not equal. In General, the success of this young gymnast is possible to enumerate still for a long time, and all that she has earned by their own labor and a great desire to become a leader.

Victoria showed a good result at the Olympic games in London and was counting on a gold medal in the all-around. However, it summed up his performance in the vault. On the basis of performances on apparatuses (vault, floor exercise, balance beam and uneven bars) Komova received from the judges the result 61,973 points, behind only the American Gabrielle Douglas. In the final, Vika lost two times the balance and took the last – eight. A young gymnast, who failed to win gold, admitted that he is not quite sure in the continuation of his career.