Where to go in Kazan

Kazan – capital of Tatarstan and one of the oldest Russian cities, which is located on the left Bank of the Volga. It is considered the cultural and historical center of the Volga region and is deservedly called the city of contrasts, the crossroads of East and West, the meeting place of two cultures. A thousand years of history and an abundance of unique architectural monuments make Kazan one of the most visited cities in Russia. 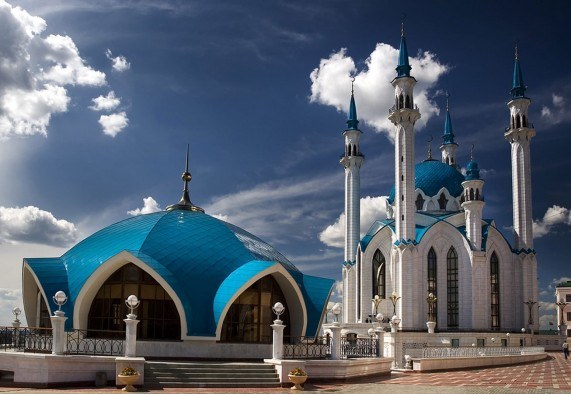 On a tour to Kazan, you can go to any time of the year. Even in the most inclement weather you will find something to do in this picturesque city and what to see. The main local landmark is the Kazan Kremlin. This medieval fortress stands at the confluence of the Volga and Kazanka rivers. In 1994, she became a Museum-reserve, and in 2000 it was included in the world heritage list of UNESCO. The fortress surrounds a white stone wall with towers. From the observation deck of one of them a magnificent view of the circus building, the main mosque, Central stadium and the river Kazanka river. The highlight of the Kremlin is the leaning soyembika tower of the Kazan analogue of the legendary leaning tower. Spire Syuyumbike rejected from the vertical by almost two meters. According to legend, this tower has dumped the Tatar Queen, not wishing to become the wife of Ivan the terrible.

Definitely worth a walk along Bauman street, which is often called the Kazan Arbat. It is a pedestrian street located in the historic center of the city. Along it are shops, cafes and souvenir shops, making it always pretty crowded. Here you can also see the fountains, the monument to Fyodor Chaliapin, a copy of the carriage of Catherine the great and a sign with the distances to different cities. Architectural monuments on this street harmoniously with the neon of shops, cafes and clubs.

Bauman street ends in a square named after Tukai, where you can see the large clock cast in bronze. This is perhaps the most popular watches of Tatarstan. Their upper part is decorated with the figure of the poet, the Muses and Pegasus, the dial is made in the Arabic script. About these watches is often prescribed for friendly meetings and romantic dates.

Should definitely visit the street Musa Jalil, where the Peter and Paul Cathedral. This is an active Church built in the Baroque style. She attracts with its "gingerbread" decoration. Moldings in the form of flowers and fruits gives reason to believe that this Cathedral was attended by the Tatar masters.

The Kul Sharif mosque is one of the symbols of Kazan, which is worthy of attention. This beautiful Islamic Shrine were built for ten years and was completed by the Millennium. Inside the mosque allowed all comers, but strictly see to it that the visitors were dressed appropriately. To enter the prayer hall, tourists are not allowed, but it can be viewed from a special balcony. In the basement of the mosque is the Islamic Museum.

Visit the St. Petersburg street in Kazan. Here is an entertainment complex under the name of "Native village", where there is a cafe, children's Playground, a bowling alley and even a mill. All the buildings in this complex built in the form of wooden huts, while numerous benches and wooden bridges decorated with hammering. This is a great place for a relaxing stay in Kazan.

Among the new attractions: water Park "Riviera", considered the largest in Russia. Here you are waiting for extreme water rides, ten slides, many pools, one of which is on the street. For younger visitors, the water Park includes a special area with shallow pools and slides safe.

In between sightseeing, visit the Halal café, where you can taste dishes prepared according to the rules of Islam. Menu such food service establishments are rabbit in cream sauce, risotto, lamb dishes, chak-chak, echpochmak.