How to knit cat crochet

Cats and kittens are popular with most people – adults and children, and women and men. That is why images of cats adorn a variety of things and you can create such a thing with his own hands, tying a toy kitten from yarn. Knitted cat would be a great gift for your friends and a favorite toy for your children. Knit this toy is very easy – you need a thin coat of white, and hair of other colors for clothing cats. Also, give holofayber for stuffing toys and crochet hook No. 2. 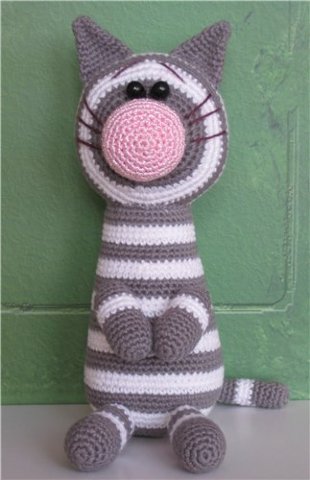 Related articles:
Instruction
1
Start knitting the cat from the lower legs. Tie a double ring and tie it with six columns. In the second row provarite two columns in each column of the first row to get 12 columns. In the third row promazyvaya bars behind the rear shackle on one column in each column of the second row. Thus, the knitting will rise.
2
Fourth row continue with knit two bow – provarite 12 columns, and then change the thread color, which you will knit pants cat. Picked up a contrasting thread hook and pull it through the last white loop. Tighten the tip of the white threads and provarite spiral columns 12 with a thread of a different color.
3
Tie five more rows and cut the thread, leaving a small tip. Tighten the loop end. After finishing the first leg, go on to knit the second leg – do air loop and thread it through the loop to climb to the next row. Expand your knitting and knit four columns without nakida.
4
Connect leg making the second leg of the air loop stitches and provatas connecting column between the legs. Tie three of the connecting column, the legs were connected firmly.
5
Proceed to knitting the body of the kitten – frog him in the spiral, promazyvaya in the first row extreme bars connecting the legs. Tie two or three rows of the spiral, and then firmly tamp the legs of a kitten with a holofayber. Again, change the thread color and provarite next row in a different color, starting knitting sweaters.
6
Tie the new thread has six rows and the seventh row start to do subtraction, threading hook in the next column, capturing the thread and hands it across the bar. Then thread the hook into another column, grab and pull the thread. Stretch the thread, yet you are not on the hook will be three loops.
7
Pass the thread directly through the three loops. Knit the next row, promazyvaya together every fourth and fifth loop. In the next row do more obavlenia – provarite together every 3 or 4 loops. Secure the thread of the connecting column and air-loop. The figure will appear the hole. Fill through that hole in the trunk a holofayber.
8
Start knitting hand – tie the first row of six columns, and then knit in a spiral, in every second column of the first row promazyvaya in two columns. Change the thread on my sweatshirt kitten to form a sleeve and continue knitting in a spiral three rows. Cut the thread and secure it, then tie another hand.
9
Now tie the tail in the first row, tie the ring with five columns and then link the seven rows of the spiral without bauleni and additions. Secure the thread.
10
Start knitting the cat's head in a spiral promazyvaya ball of conventional columns without nakida. Evenly add and then take away the hinges, so you have a spherical figure. Stuff the head through the hole, close the hole with poles, and cut the thread. Separately tie the muzzle and ears of a cat. Sew the ears and muzzle to head, then sew the nose of the bead and eyes. Knitted cat ready.
Is the advice useful?
Подписывайтесь на наш канал