How to distinguish a Viper

Summer sun happy not only people and animals, but also reptiles, which often crawl on roads and clearings. Specialists serpentary believe that snakes never first attack humans. And they do it only in self-defense. 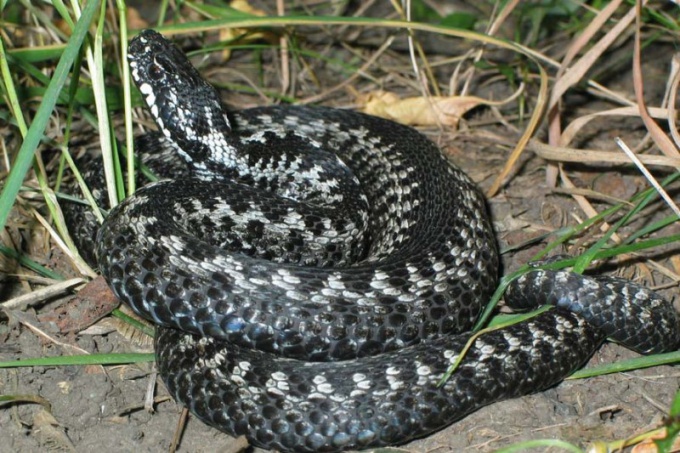 Related articles:
Instruction
1
It is believed that the prototype of all vipers is the adder (Vipera berus). It has turned into flaps of scales on crown, sometimes a single row of scales between the eyes and lying under them verhnevolgye flaps.
2
The shape of the adder is different from most reptiles in Europe. Her head back rather wider neck and a little flat, and the front slightly rounded. The neck is compressed laterally and clearly separated from the head and body, which is much thicker neck.
3
Painting the vipers are very diverse, but, nevertheless, it is believed that reptiles are silver-gray color, light ash-gray, greenish, light yellow and light brown. Throughout the body of the snake you can see the jagged dark longitudinal stripe whose color matches the body color. For example, the vipers are light yellowish-brown color and stripe sand color.
4
Except this band the vipers are distinguished by the pattern on the head. The middle of the crown is decorated with two longitudinal bands with irregular spots and dashes. The bands come from eye shield are in the middle of the crown, can connect with spot of similar color and diverge, forming a triangle.
5
In most cases, the underside of the reptile in black or dark gray. On each flap there are separate or confluent yellowish spots of various shapes.
6
The hallmark of vipers are also large fire, round eyes. Thanks nadlezni the flaps, they give the impression of anger and deceit, especially if to remember that no other snake has no pupil in the form of oblique longitudinal cracks. In bright sunlight, this gap shrinks to a thin barely visible line, and in the dark greatly expanded. Basically, the color of the iris is a bright fiery red.
Useful advice
Bitten by a Viper in providing immediate medical attention is not fatal. Its venom increases the permeability of blood vessels and disrupts blood clotting, so there is swelling of the tissues decreases blood pressure. The snake consumes your poison sparingly, using it only to slay the "lunch". So sometimes the bite of a Viper is harmless. In such cases it is called "dry".
Is the advice useful?
See also
Присоединяйтесь к нам
New advices