How to change spokes

The quality of the installation and adjustment of the wheels is almost entirely dependent ride quality of the bike. One of the stages of preventive maintenance of Bicycle wheels is to replace the spokes and the subsequent balancing. These operations require accuracy, thoroughness and adherence to procedures. 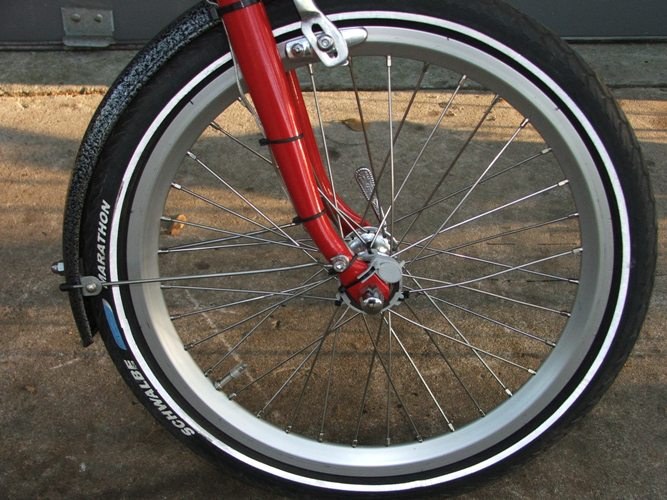 Related articles:
You will need
Instruction
1
Lubricate with engine oil to the threaded part of the spokes and the wheel rim in contact with the nipple. This will allow you to tighten the spokes with a sufficient rigidity.
2
Inspect the flange of the rim. If the holes on the flange are countersunk on one side only, the installation of the spokes should be on the side opposite to the countersink.
3
Insert in the flange of the first nine spokes in such a way that between them is one free hole. On the rear wheel installing spokes produce, starting with thread (right) part of the hub.
4
Help the rim among the holes offset to the right, which is located to the right of the gate entrance. Insert it hole first (the key) spoke. Tighten the nipple on two turns.
5
Following clockwise, count the spokes from the first four holes, install the second needle and tighten the nipple. The threaded part of the bushing should be facing you.
6
Check the correctness of the initial installation. Both spokes should connect the right side of the rim with the right flange of the sleeve, and between the spokes you must have three available holes.
7
Attach the following seven spokes, by installing them in every fourth hole of the rim.
8
Turn the wheel to itself the other party. Mount nine spokes, inserting them into the left flange. Start with the key (the tenth) of the spoke to the left of the valve hole. After the installation of the specified element remaining eight spokes on the left side type in the same sequence as in the right part of the rim.
9
Inspect the wheel. If done correctly, then the entire circumference of the rim interspersed with pairs of holes with the nipples and a pair of free holes. The nipple should be wrapped only by a few turns.
10
Install the tension spokes. Their heads should be located on the inner side of the flange. Insert one of the spokes in the hole in the flange and twist the hub to the spokes of previously received received a direction close to a tangent relative to the flanges.
11
Dialing the first nine of the tension spokes, make sure they have been inserted into the hole of the rim that are offset to the corresponding flange. The other tension spokes dial as well. If their tips do not reach the nipple holes, loosen the nipple the rest of the spokes on one or two turns.
12
After installing all the spokes are tighten the valve at the same depth that the ends go to the level of the slots of the nipples.
13
Skip to uniform the tension of the spokes. Tighten each nipple one turn, starting from the valve hole. Sequentially scroll through all the spokes, trying to provide equal tension, without the formation of "eight". Final inspection and finishing of the rim, setting it on its place and rotating around the axis.
Is the advice useful?
See also
Присоединяйтесь к нам
New advices