How to draw the Eiffel tower with a pencil

The Eiffel tower is a true symbol of Paris. No wonder she's constantly photographed in a variety of angles. Try to show originality – to depict the famous tower in engineering graphics, drawing it with a pencil. 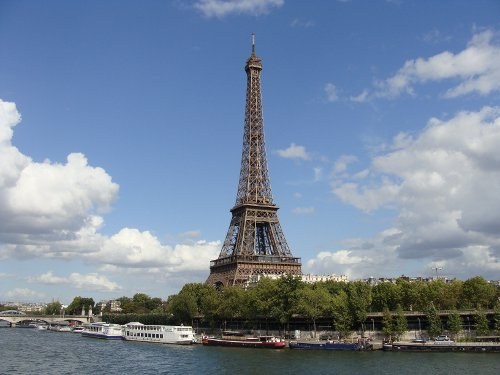 Related articles:
You will need
Instruction
1
Before you start work, examine the various images of the Eiffel tower. It is desirable to examine it from different angles. Rate its proportions, the tangle of beams, the shape of the base. Check with the photo while drawing. Do not have to copy the picture – the photo will need for greater accuracy and reliability of the picture.
2
The tower has a shape of an acute triangle with a moderately broad base and very elongated top. Using the ruler and pencil of medium hardness, draw a figure, dividing it in half with a vertical line.
3
Do four horizontally, razmeshalsya the outline of the future tower. The first lines separate approximately the fifth part of the base. The next two are closer to the center, and the latter separates a small area at the apex of the triangle.
4
The next stage – drawing of the internal circuits. Imagine three pyramids, put on one another. Draw a double line separating each part of the tower. Inside the great pyramid, draw a triangle and draw a lateral line in the bottom two pyramids. They should smoothly connect with each other, forming the silhouette of the tower. Auxiliary erase strokes with the eraser tool.
5
Trace the outline of the drawing with a soft pencil. At the base of the draw arch, and superimposed on it a horizontal beam. In the Central part of the tower plan balcony. The tower's draw a double line with a ruler. In the lower part of the figure mark the outlines of tree crowns.
6
Start the drawing of the internal construction of the tower. Throughout the height of the double horizontal guide lines should be located at an equal distance from each other. Don't forget to draw the base of the tower and the arch. On top of the spire label.
7
In the cells formed by the horizontal lines and contours of the tower, draw a steel ceiling in the form of oblique double crosses. Ceiling the balconies draw double vertical lines. Check the resulting sketch with a photograph of the tower. Erase the bad strokes and outline the entire drawing with a soft pencil.
Is the advice useful?
Присоединяйтесь к нам
New advices