Under the flights, or migration, of birds mean their resettlement or relocation directly associated with changes in environmental and feeding conditions, as well as the nature of reproduction. Each species of migratory birds flies away and returns within a certain period. However, their wintering grounds remain constant. They usually overwinter in places where the natural conditions correspond to the conditions of life at home. 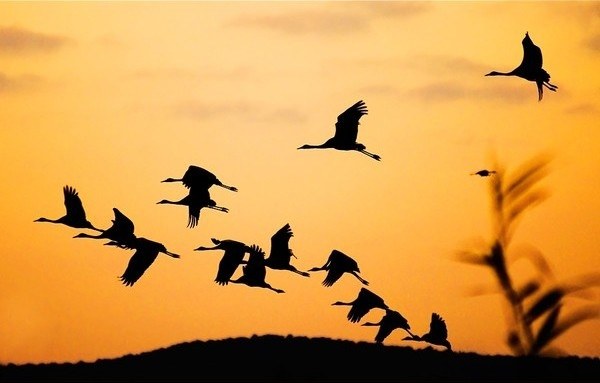 Related articles:
Geese, ducks, cranes belong to migrating birds. The main reason for their flight is the food. Birds quickly consume the energy obtained from the diet because of things they have is often much. Thus, when the ground freezes and food becomes extremely difficult to find, especially insectivorous birds, many of them travel to warmer climes. And as soon as the young learn to fly, begins the autumn migration of birds. Before leaving, they often gather in flocks, then disperse over long distances.The cranes spend the winter on the sprawling territories. The cranes that live in the European part of Russia leaving to spend the winter in Spain and Algeria, living in Western Siberia fly to India, in Eastern Siberia to southern China. Black crane nesting in Japan and Eastern Siberia, carries out flights through Mongolia and Northern China to South-East Asia, where it spends all winter. During migration, most of the cranes are flying at the altitude of 600-1000 metres and above. The flights in the daytime is about 400 km. In September starts the ducks and geese. Consider the birds in the bulk of winter in the Caucasus, in the South of the Caspian, Azov and Black seas, the Mediterranean, Asia Minor, Iran, India, and in the lower Danube and on the shores of the Baltic sea and the British Isles. Some species of ducks, geese overwinter on the territory of the former Soviet republics of Turkmenistan, Azerbaijan, Black sea, lake Issyk-Kul, located in Kyrgyzstan. In designated areas in winter accumulates a large number of birds, their protection has established a special reserves. During seasonal flights of geese are gaining a lot of height. They fly in flocks, wedge or in the rare case the line. The number of birds in a single flock is different from a few pieces of birds to several hundred.
Is the advice useful?
See also
Подписывайтесь на наш канал