When come the autumn cold, many birds that live in our band, disappear, and reappear in the spring. This, for example, ducks, geese, cranes. On this phenomenon people noticed a long time ago and called these birds are migratory, they fly away to winter in warmer climes. 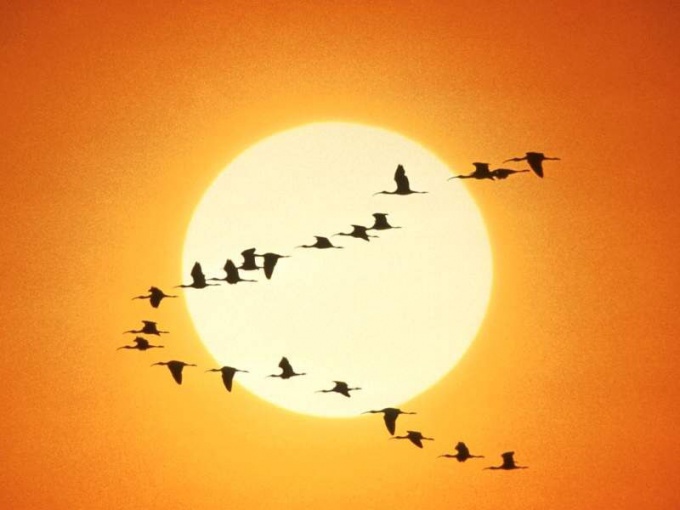 Related articles:
Seasonal bird migration is an amazing phenomenon of nature. After all, not only those flying birds that live in the North, but also those that live in the South and even near the equator. Why do they do it? And what prevents them to stay where they spend the winter? If in the North the birds pluck from their homes because of the cold and lack of food, the inhabitants of southern latitudes fly due to the change of dry and wet seasons.In Russia, however, the most notable migratory birds are considered as cranes, ducks and geese. Every autumn you can observe large flocks of these birds, beautifully moving towards the South. But where exactly? Previously, scientists have tried to figure out this question, acalculia birds. On the light weight aluminum tag was embossed, where and when it is worn. Today, there are more accurate methods – radar and telemetry. On the backs of birds attach small radio transmitters. Thanks to these methods, ornithologists can't just exactly say, where they fly their wards for the winter, but with the way they move back where they make stops. Interestingly, the path and distance from every single flock is different, even if the one.For example, the cranes can fly for the winter in the distant Africa, India, China or Egypt (where they live in the Nile Delta). Very interesting to see the lakes and marshes of Lower Egypt in the winter – the whole winter and spring they all, down to the shores of the Mediterranean sea, dotted with many birds. And it's not just the cranes, and wild geese, European ducks, other birds. They all wait out here in the cold.But geese, for example, can roam and in Russia, flying in its southern region, for example, to the warm waters of the Caspian sea, at its southern tip. In the West of the Caspian sea wintering ducks-shilokhvost. But they can still fly and the Mediterranean sea or in the lower reaches of the Kuban. Ducks-mallards fly to Western Europe through Belarus and Ukraine. Or further afield – in Africa, the Balkans, Northern Italy.Very interesting to see exactly how flying birds – in flocks, in a very strict order, headed by the leader. The way usually lies through areas that are favorable for the birds for the presence of food, landmarks, aerodynamic conditions. And in the spring the birds gather again in the way home. If any of them did not return, it means that the bird died.
Is the advice useful?
See also
Присоединяйтесь к нам
New advices