How to get an absentee ballot

Absentee card – a document that allows a voter to vote for the selected candidate in another electoral precinct. It is made by election commissions in accordance with the requirements of the legislation and is issued prior to the vote. 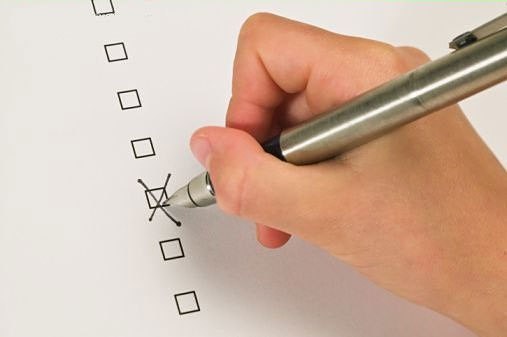 Related articles:
You will need
Instruction
1
An absentee ballot beginning be issued 1.5 months in the territorial election Commission, which is located usually in the building of the local administration. And for the month – in the precinct election Commission at the place of residence of the voter. The results of this document ends on the last day before the election.
2
To obtain an absentee card, come with your passport at the right time to the election Commission. Write there the application for issuance of the document indicating the reason you are not able to vote at their polling station.
3
After this, your data will bring in the register of issuance of absentee cards, you can sign there and get your hands on the required identity.
4
If you are unable to come for an absentee passohms, send to the election Commission its representative. He will be given a certificate in your name only if you have your own passport and notarized power of attorney. To assure it can also the administration of the medical institution in which the voter is on treatment. After issuing an absentee passand the representative, the members of the election Commission will revoke the power of attorney.
5
Absentee ballots the voter is entitled to vote at any polling station within that district, where he has an active right to vote. That is, when the selection of the President of the Russian Federation, the absentee owner of the ticketand may vote at any polling station on the territory of Russia. And with regional elections on the area within the district where election is being held.
6
To vote on such certificate, come to the polling station, give your Committee members a passport and a absentee card. After that, they will check your documents and if they are right, will give you a ballot for a vote.
Is the advice useful?
See also
Присоединяйтесь к нам
New advices