How to determine the tempo of a song

Pace is one of the fundamental characteristics of music. There are traditional methods of determining the tempo of songs, and computer programs that serve their peers. 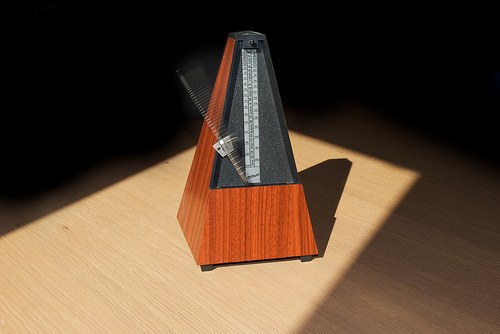 Related articles:
You will need
Instruction
1
This term is derived from the Italian word tempo, which in turn goes back to Latin tempus "time". The pace represents the speed of transition from one musical unit to another. Classical music uses several basic types: Largo and Adagio (slow), Andante and Moderato (moderately fast), Allegretto (fairly fast), Allegro, VIVACE (quick, lively), Presto (very fast). Often in the score indicate not only the name of momentum, but its speed in absolute units (e.g., 60 beats per minute may correspond to Andante).
2
Traditionally, to determine the tempo, use the metronome. A device consisting of a housing with a pendulum markings and hands with a weight that allows you to observe the frequency of vibrations of a certain rapidity (in absolute units – the number of beats per second). Shifting the weight down, you ask more fast paced, up – slower. The oscillation speed of the metronome of the arrow marked on it in a scale. The first oscillation should coincide with the first beat of the piece.
3
The problem of determining the rate rises not only to the performers of instrumental music, but also to the sponsors and handlers of electronic compositions. Of particular concern is the works with broken rhythm, namely, it characterizes the many directions of modern music – from drum and base to techno, from house to breakcore. There are many software programs the functionality of which includes measurement of the tempo (beat per minute) of the musical segment. These include programs for DJing VirtualDJ, FL Studio and their analogues. There are simple counters BPM (MixMeister BPM Analyzer, and others), which operate on the principle of a metronome.
4
Many controllers for DJing has a built BPM counters, but relying on them is not necessary. First, the accuracy of most of them is only 1 beats per minute (when temp 130 BPM gives the deviation of 0.77%, while faster – and even more). And secondly, one day you may be behind the decks, in which there is this device, and have to rely only on themselves. So it is recommended to use the BPM counters for self-check at the beginning of the track.
Is the advice useful?
See also
Присоединяйтесь к нам
New advices