How to: configure basic guitar

The game upset on the guitar leads to a deterioration of hearing, so even beginners before you start training, you need to carefully adjust the sound quality of a musical instrument. For tuning guitar strings tuning pegs are used, which are on the fretboard and keep the tension. Torsional to one side, the string is stretched, the other is weakened. Need to twist slowly, listening to the resulting sound. 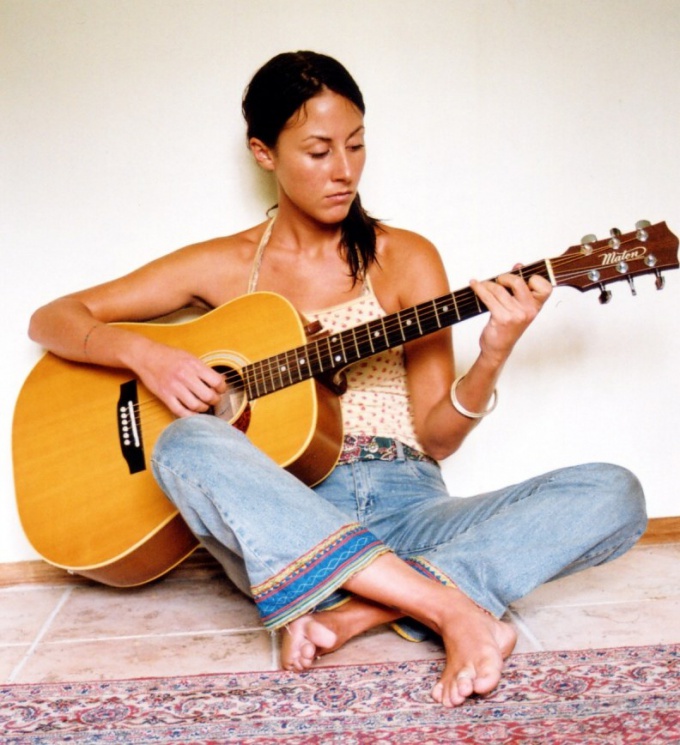 Related articles:
You will need
Instruction
1
The classic way: the first string (the thinnest) tune using a tuning fork. Tuning forks are divided into thymus and wind. The latter is easier to handle, but less accurate. Thymus tuning fork similar to the metal plug. If you gently hit the fork on the knee of the leg, then the resulting sound will be what should be the sound of the first string pressed on the fifth fret. The brass tuning forks have several varieties, the most common of them like a harmonica. He makes a sound, which should make the first string, pressed on the twelfth fret. Once you have set the first string, proceed to configure the rest. Press the second string on the fifth fret and get the open sound of the first string. The third string, the fourth fret is pressed must in unison sound with an open second. The third sound of the open strings you will hear if you pinch the fourth string on the fifth fret. Holding down the fifth string on the fifth fret, get the sound of an open string the fourth and sixth on the fifth or open fifth.
2
If you want to fine tune the guitarwithout relying on your ear, use a tuner (hardware or software). It is the frequency of sound vibrations determines the note that corresponds to it, and shows the deviation of sound from the notes. Hardware tuner is a small device that can be purchased at a music store. Remove the sound of the guitar, place the tuner near or securing it on the neck (depending on species). The device will tell how this sound is very note. Loosen or pull the string (depending on reading device) as long as the sound will not be perfect. When using the software tuner connect guitar to the computer you specify which string you want to configure, pull it, and follow the instructions of the program.
3
If you want to tune all the guitar strings by ear, use an Internet program that contains samples sounds recorded on professional equipment. Customize your tool analogy. Pros: it is possible to play the sound multiple times to connect to the PC. Minus: if you don't have a good ear, tuning may not be accurate. If you plan to tune your guitar on the street, load these samples on the phone. But remember that when playing may be a slight audio distortion.
4
If you are the owner of a good musical ear and you have the skills guitar tuning in the classical way, try to configure the instrument using harmonics. This is a relatively difficult method used by professional guitarists, because that is the most accurate. To extract the harmonics (sound-overtones) slightly touch the sixth string on the fifth fret (just above the nut fret, not fret over). Right hand, remove the sound, then immediately remove from the string the finger of the left hand, so as not to dampen the sound. Do not lift your finger before the time, and you get the sound of an open string. For comparison, extract the sound-the overtones of a fifth string on the seventh fret. The coincidence of the sound – a sign of the correct settings.On the first string seventh fret harmonics should sound in unison with the harmonics of the fifth fret of the second string and sound the harmonic twelfth fret to the third string the same as the first string, sandwiched on the third fret. The third open string set up clamped on the eighth fret second string. On the seventh fret of the third harmonics of the string tune in unison with the sound-the overtones of the fourth string on the fifth fret. On the seventh fret of the fourth string flageolet sounds like the sound-the overtone of the fifth string fifth fret. Sound-the overtone of the fifth string seventh fret tune like the sound of the flageolet fifth fret to the sixth string.
Note
A wrong setting can ruin guitar strings: excessive padding they stretch and no longer resonate, as it should be.
Useful advice
Instead of a tuning fork, you can use a landline phone: the sound of beeps in the receiver (frequency 425 Hz) roughly corresponds to the sound of the first string, sandwiched on the 4 fret (frequency 415 Hz).

Tuning with harmonics it is convenient to use a standard guitar tuning to improve the sound
Is the advice useful?
Присоединяйтесь к нам
New advices