How to cook squid meat

Squid are cephalopods, relatives of the cuttlefish and octopus. Some species of squid reach 20 meters in length while the smallest species does not grow more than 2-3 cm. The squid is delicious, nutritious white meat with a slightly sweet nutty flavor, easy to prepare and they are inexpensive – it's not surprising that squid are very popular with chefs and consumers. 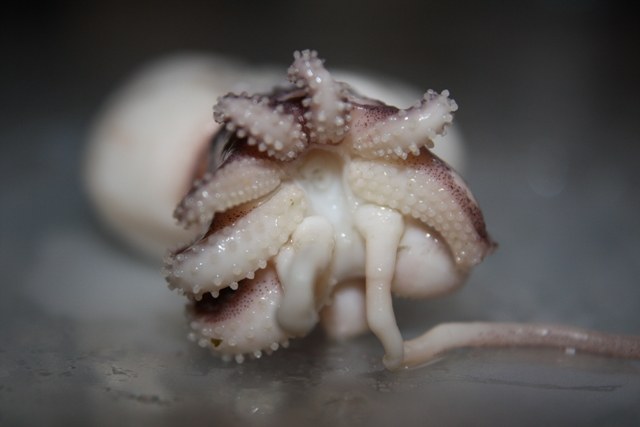 Related articles:
You will need
Instruction
1
Cook squid either very quickly or on the contrary very long time. Just 2-3 minutes on high heat toboil the carcass squid, if you are going to extinguish it or wait too long, you need at least 30-40 minutes, so the meat has ceased to be "rubber".
2
Frozen squid should be thawed before cooking. If you have uncleaned squid, clean them. Pull out the beak, take a thin plate, remove the skin. Rinse the carcass squid under running water. Cut off the tentacles and cut the squid body into rings.
3
Squid is cooked in boiling water. Prepare a large pot of water and a slotted spoon when the liquid boils, put into it some salt and a couple tablespoons of acid cider vinegar, white wine, lemon juice.
4
Dip the squid in the water and stand with skimmer at the ready. Once the meat of the squid turns white, remove it.
5
Ready squid put on a paper towel to cool and dry. You can put cooked squid to the salad, to marinate or eat immediately, as do the Japanese, loaded with only soy sauce.
6
A good marinade for the cooked squid can be prepared from lime juice, sesame oil, rice vinegar, brown sugar, a few cloves of garlic and a mixture of fresh chopped herbs, such as mint, cilantro, lemongrass.
7
Do not have to boil the squid in plenty of water, because with the same success they can be pozirovat – cook in a small amount of water or broth with a small addition of acid. For example, mix in a deep frying pan equal number of water and Apple cider vinegar, add a little less soy sauce and a little grated ginger. Bring to the boil and put in a pan of squid. Cook for 3-4 minutes.
8
If you overcooked the squid, it is easy to fix. Put them in a saucepan with red wine, garlic, thyme and pepper and cook over low heat for 30 minutes to 1.5 hours.
9
If you find boiled squid meat, even cooked in a few minutes, a little harsh, try to marinate it before cooking in the yogurt, lemon juice or pulp of kiwi fruit or papaya. Marinate no more than 15-20 minutes depending on size of squid.
Useful advice
Squid is a good source of potassium, b vitamins, selenium, magnesium and zinc. The portion of the squid (100 g) contains 78 calories and only one gram of fat. But to abuse the seafood is not necessary, as in the same 100 grams and contains 198 mg of cholesterol, nearly two-thirds of the daily allowance.
Is the advice useful?
See also
Присоединяйтесь к нам
New advices