How to prepare pureed soups

Pureed soupsgenerally are assigned to people suffering from diseases of the gastrointestinal tract, for example, gastritis or ulcer, and inflammatory diseases of the upper respiratory tract, e.g., bronchitis or angina. Babies under one year, especially for those who have no teeth, it is also recommended to include in diet pureed soups. 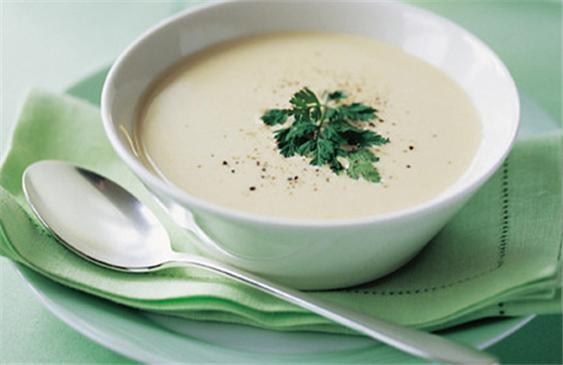 Related articles:
You will need
Instruction
1
Pureed soups, usually cooked on a broth of grains, vegetables, meat broth or a mixture of these concoctions. In their may include such products as meat, poultry, fish and different vegetables: zucchini, cauliflower, pumpkin, potatoes, carrots, green peas.
2
Products used for making pureed soups, you can RUB through a sieve or grind in a mixer to a homogeneous consistency. Those products that bad noodles, mince with shallow bars 2-3 times. Then wipe the received weight through a sieve. Grits grind in a coffee grinder or a mortar.
3
To cook oatmeal pureed soup, oatmeal, run through, rinse it, pour boiling water and simmer until fully cooked. The resulting broth strain, rump RUB through a sieve again and mix it with the broth. Add to soup hot milk, bring it to a boil and remove from heat. Shake in a bowl or a small bowl of raw egg and fill them with hot soup. Add the pureed dish of salt, sugar or butter.
4
To prepare grated potato soup peel, wash and boil the potatoes. Potato drain the broth in a small pot, and potatoes wipe through a sieve. Then get cooking a special sauce. Dissolve the flour in two or three tablespoons of potato broth, boil the resulting mass and strain. Next, mix the broth, sauce and pureed potatoes, add a raw egg and butter. Thoroughly mix the soup, boil it and add salt. Before serving, season the dish with sour cream and garnish with finely chopped greens.
5
Very useful a pureed soup of cereals Hercules with vegetables in meat broth. To cook it is not difficult. Pour oat groats into the boiling water and cook it until cooking on low heat for at least an hour. Rump carefully wipe through a sieve. Then clean, wash and cook in meat broth potatoes and carrots. Vegetables to wipe through a sieve and mix with the crushed grains. Pour the resulting mass of meat broth and bring soup to a boil, then add salt.
Is the advice useful?
Присоединяйтесь к нам
New advices