Modern women wear necklaces with no less pleasure than their great-grandmothers. To make this decoration can be from a variety of materials. The beads have one serious drawback: the thread may break at the most inopportune moment. It is not necessary that after such a trouble of the beads remained in the box. Of them even you can make something new if the old beads managed to podnadoest. 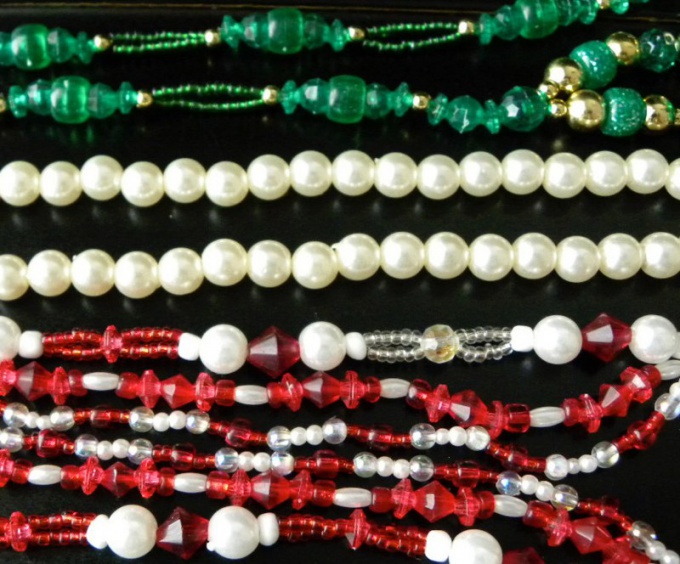 Related articles:
You will need
Instruction
1
If you liked torn beads and you would not want to change their form, take a new thread and again collect the beads in the same order as before. Use a sturdy thread. Nylon will fit in any case and cotton first try to break. Use it only if the gap requires a rather large effort.
2
Beads with large enough holes you can string the most common sewing needle. This method applies if you have good vision, precise movements of the hands and you are afraid to scratch the material. The thread in this case can be double, even folded in four. In all other situations, dip the thread end in nail Polish and wait until the drop dries. She will play the role of a needle, but not hurt. The thread should be slightly longer than anticipated beads, because the ends must be bonded. The excess will be trimmed after work.
3
Beads without string locks in any order. Enter the end of the thread in the first bead and pull it almost to the other end, leaving a small cut. Put all the other beads. The ends of cotton yarn tie a double or triple knot. The remaining pieces are cut almost to the knot, leaving the tips of 1-2 mm. the ends of the synthetic thread or fishing line sealed. This can be done by using a very hot thin knife. Convenient to use and needle to burn. Sapevate very careful not to burn the thread and not to damage the beads.
4
To pereneset beads with a lock, the first end of the thread attach half of any clasp. To do this the easiest with a needle with cotton thread, because the lock should be properly braced. Attach the beads to the second end of the sew the second half of the clasp.
5
Finding a box of several different types of beads, make a composition of them. Fit is not very intricate schemes for beading. Possible and without any diagrams to make an interesting decoration. Cut a few strands. For example, there may be two or three. For beads without thread lock them, first in one bead. Then divide and place the first one thread, then another. At the end of the work thread again thread one bead. Tie or solder the ends of the strands.
Useful advice
You can make a pattern with uniform alternation of single beads and groups. Pass one bead of the multiple threads or attach them to the half lock. String 3-5 beads on each thread, and then thread the all thread into one. Beads for groups and single can be of different type and size. If a lot of beads, you can make a pattern in the form of braids. String first three strands, braid them into a braid, the ends of the threads will seal it. KOs may be from four and five strands.
Is the advice useful?
Подписывайтесь на наш канал