How to tie a knot in beads

Jewelry made with his own hands, is very popular today compared to factory jewelry – handmade items make you more original, brighter, and also allow you to create your own unique style. Not only can you wear the finished jewelry made by other artists, but make your own and it will help you a simple technique of tying a sliding knot, which is necessary if you want to make a necklace and handmade necklace. 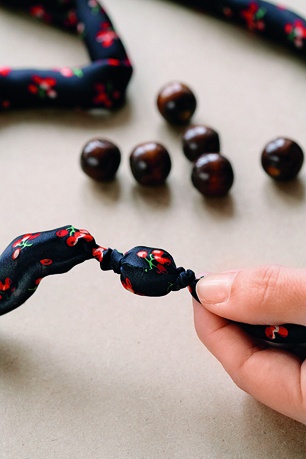 Related articles:
Instruction
1
Prepare a cotton or satin cord to the desired color that is already strung elements of future beads. Cord length must reach the meter, and the easiest way to tie such knots on waxed cotton cords, as they don't slip and the knots are sturdy.
2
The cord ends point towards each other so that each tail of the cord was a length of 15 cm Bend the right side of the cord into a loop about 10 cm, placing the end of the cord with the edge, and then wrap the cords in a ponytail, making a few turns, guiding them himself, and putting the coils close to each other.
3
Enough to make three turns, holding their fingers to the cord won't come loose. The tip of the cord that you've wrapped around the main cord, insert the loop and carefully tighten the knot. Tightening the knot, pull both ends of the cord simultaneously.
4
In this case check whether moving the knot on the cord – it needs to be tied tightly, so he did not subsequently dismissed, but not excessively, otherwise, it will not slip. Tying the first knot, proceed to the second tying.
5
The second node fit the same as the first -- use the cord loop, wrap tail several times around the cord and thread it into the loop and tighten the knot. The place where you are knitting the second node, define depending on how you wear the beads, and what distance should separate from each other both nodes.
6
Measure the length of the resulting beads and check to see if they are worn freely through the head, and whether the slip knots on the cord. If the length of the beads you are satisfied, lock the nodes that are dropping on them drop by drop of super-glue. The excess ends of the cord cut off and also lock the slices with glue.
Is the advice useful?
Подписывайтесь на наш канал