How to draw star wars

The characters of the Saga "Star wars" have already become cult – images, and images are used in books, comics, ads, and thousands of fans of "Star wars" dream to learn to draw your favorite heroes yourself. To draw the character of "Star wars" is not so difficult, if you imagine each character in the form of several basic shapes that you will take the basis of the shape of the body of the hero. 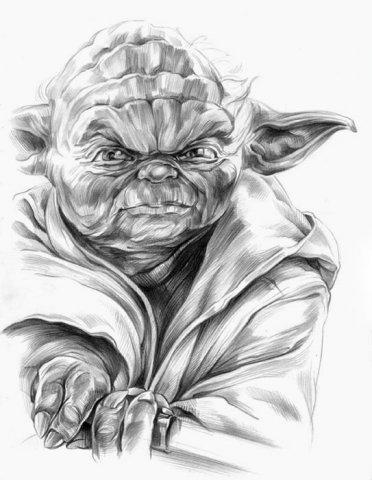 Related articles:
Instruction
1
For example, if you want to draw master Yoda – one of the main characters of movies and books – start with the fact that you draw an equilateral triangle. Of the vertices of the triangle swipe down strictly vertical line perpendicular to the base of the triangle.
2
Closer to the top of the triangle, stepping back two thirds of the height from the base, draw a line curving down and under it draw a line with more curve. Below the top line draw the slanted eyes of the character, which occupy almost the entire width of the triangle. Draw the lower eyelids of each eye in the form of three curved narrow down lines.
3
Then draw three vertical winding wrinkles, the middle one goes between the eyes of Yoda and coincides with the direction of the Central axis of the triangle and the other two are on both sides and also aligned with the Central crease between the eyes.
4
Now draw the nose Yoda, mouth and chin line. Around the mouth, draw the wrinkles in order to emphasize the advanced age of the character.
5
Around the top of the triangle draw the outlines of the head of Yoda and mark eyebrows and on the outer sides of the head to the left and right draw the large ears, located at an angle to the sides of the triangle. For the ears draw the character's hair and then proceed to drawing it.
6
Clothes Yoda's cloak, so draw the folds of the hood and mark the outline of hands folded under his cloak. Detail Yoda costume and paint of the character.
Note
How to draw a plane. Pictures military or passenger aircraft is not so difficult to do even for a child. Military aircraft differ from passenger aircraft. They have a different form and attachments for military power. In this you will learn how to draw a military plane in the sky, step by step with a pencil.
Useful advice
We will be learning how to draw the war with a pencil in stages. It will not be star wars and Darth Vader, and not even a shooter game, and the real that neither is war! Three soldiers in a trench, with piles of military equipment. Let's now digress from the tanks and try to draw military actions with the participation of these soldiers. Ahead of five steps. How to draw the war with a pencil in stages.
Is the advice useful?
Подписывайтесь на наш канал