Nightmares is pretty well-known phenomenon, both among children and among adults. They enter our dreams, terrified, forced to escape from the arms of Morpheus in a cold sweat, jump out of bed, and sometimes even scream. And such phenomena cannot be nullified and impact on health. First hit takes the nervous system: the person becomes irritable, not getting enough sleep, overall quality of life decreases dramatically. 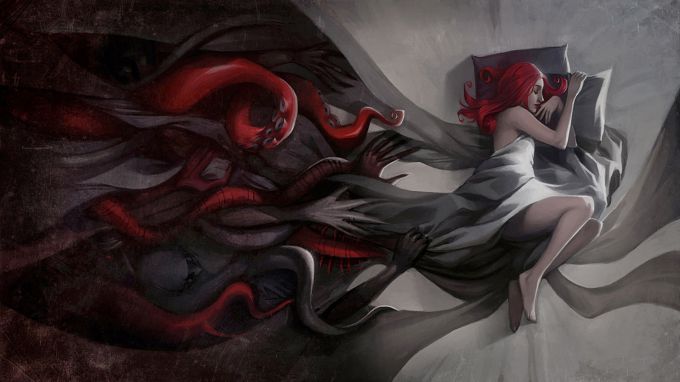 Scary dreams are different: somebody dreams about how he was late for the bus, someone-as it kills the maniac. And all these nightmares have the same effect: we feel horror and fear and remember these dreams down to the smallest detail.But surely a man is never to get rid of this unpleasant phenomenon?

Really all tools are useless? And here and there. Specialists from various universities have identified the causes of nightmares and ways to regain a good night's rest. Let's start

First: the root cause of such dreams is stress. Every day we are faced with external stimuli: place in the hospital, the evil boss, some changes in life, divorce or moving. And all this is reflected in our dreams. Also, the appearance of the nightmares influence and really heavy events, such as in childhood: for example, he at one time were abused, saw with their own eyes the murder of his parents.

The second reason for the nightmares is a certain foods. Especially on the brain effect of acute and fatty foods. Spicy food increases the metabolism, activates the brain, and therefore, if you eat such foods before going to sleep, the brain will continue to work actively to facilitate the path of nightmares in your life. Fatty foods also had a negative effect on sleep.

The third reason for nightmares is alcohol. In small doses it promotes sleepiness, but if abused by certain drinks, the nightmares will once again conquer your dreams.

The fourth reason for the emergence of this unpleasant phenomenon are the certain drugs, or otherwise acting on the brain. It may be different kinds of antidepressants, narcotics, barbiturates. This side effect has, for example, the drug Lariam against malaria and Ketamine is used as anesthesia.

And the final chord of occurrence of nightmares - these are the diseases that accompanied by fever and fervor. Therefore, patients ORVI or flu often see bad dreams.

This is perhaps the most common causes of nightmares. Try to analyze the past day, after which you visited a bad dream, and then we can determine what is the source of your nightmares.