Meals on the campfire: how to cook crumbly buckwheat

Cooking on a campfire has its own characteristics: the degree of heat to regulate is difficult, so cereal it burn, be undercooked, or overcooked. So for cooking crumbly buckwheat is better to use special "campfire" technology. 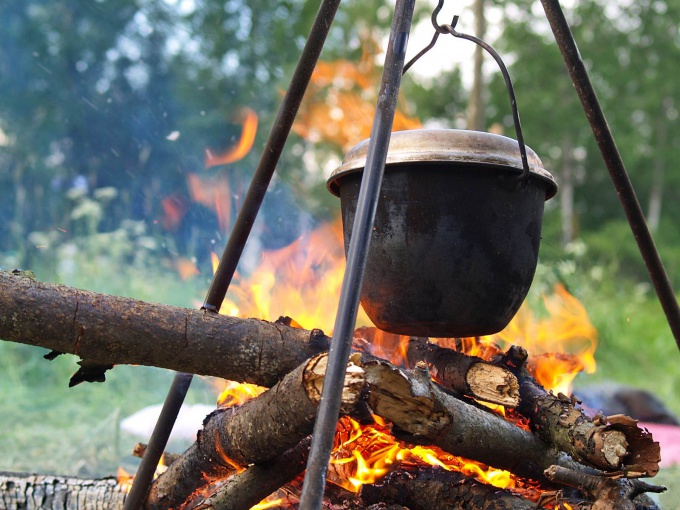 Related articles:
Instruction
1
Pour into a clean pot buckwheat and pour it with cold water. At this stage the main thing – do not pour water "by eye", and strictly follow the proportion of 1:2 (one part buckwheat to two parts water), measuring the cereal and the water jug.
2
Add salt – it is easier to do while the pot is still not on fire. You can also add a handful of sliced dried vegetables – carrots, onions, tomatoes or peppers.
3
Put a pot on the fire. It is better if the buckwheat will be cooked on medium heat – the slower the heating, the better mushy grits and the tastier it will be a mess. If the possibility to adjust the position of the pot over the fire there – just try not to "Stoke" the fire until, until the porridge will not be removed.
4
If you plan to cook a stew with buckwheat – pre-open cans, remove the layer of fat (you can immediately send it into the pot with barley), slice the meat with a knife or mash with a fork. Despite the fact that the stew does not require cooking, add it to the buckwheat is best before boiling water, not at the end of cooking – when the porridge soaked "cold spirit".
5
When the water in the pot with the buckwheat begins to boil – remove the pot from heat, close lid and place near the fire – in the area of "warming the hands" (where the heat from the fire still feels good, but not burn your hands). Leave to stand for 15-20 minutes. The heat from the fire will prevent rapid cooling of the water, and buckwheat "steamed", will absorb the remaining water and comes to ready. If you've added in buckwheat stew – after cover of the boiler is opened, how should I mix the cereal so that the meat is evenly distributed. Crumbly buckwheat on the fire ready.
6
Porridge cooked with this technology is very tasty. In addition, the insistence by the campfire eliminates the sticking, the mess does not stick to the walls and bottom of the boiler which allows you easily to wash the dishes.
Is the advice useful?
See also
Подписывайтесь на наш канал