When in St Petersburg the white nights

The period of white nights in St. Petersburg – one of the main symbols of the city, the peak of the summer tourist season. At this time, the city on the Neva is especially crowded and lively both day and night. When in St Petersburg the white nights and how long is this magical time? 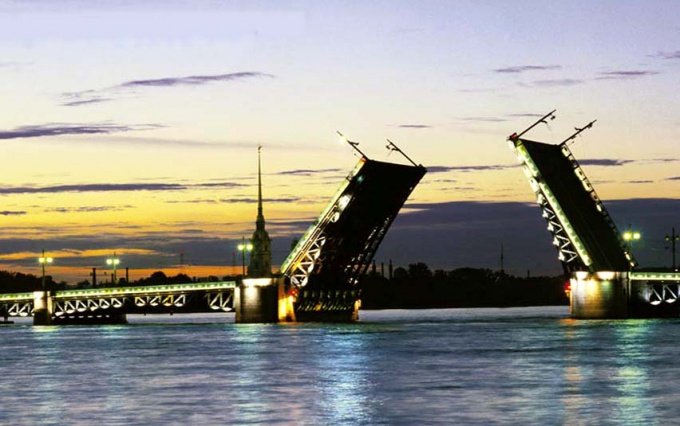 The period of white nights in Saint-Petersburg

White nights – a time when the evening twilight merges with the morning, and the darkness of night never comes. To observe this natural phenomenon in the Northern regions at the latitude of not less 60о33’. The length of the period of white nights depending on the geographical area.

The "official" time when in St. Petersburg, the white nights, is considered to be June 11, with the end date to 2 July. The white nights peak falls on a three-day summer solstice, June 21-23, when the day length from sunrise to sunset is about 19 hours (or rather, 18 hours and 51 minutes). The so-called "civil twilight" (during which it is possible to better distinguish the surrounding objects without additional lighting) at this time starts around midnight and ends around 2am.

But actually to experience white nights in St. Petersburg possible. The evening twilight merges with the morning here, starting from may 25-26 and till July 16-17. The sun at this time does not fall below 9 degrees below the horizon, and darkness as such does not occur. One time in St. Petersburg in this period was turned off night lighting in the streets and without enough light.

What happens during the white nights in Saint-Petersburg

In the period of white nights in St. Petersburg is very crowded: in the city centre and bustling night and day. At this time, is the traditional feast of "Scarlet sails", a sort of citywide prom for students and other celebrations, music festivals and sporting events.

When in St Petersburg the white nights of the city is very actively offer the night program: bus and walking tours, walks along the rivers and channels. "Highlight" of the program is traditionally a impressive spectacle of the bridges: on the quays of the Neva river at night is very crowded, and cars and tourist buses in the city centre sometimes stand in traffic jams.

Many cafes and shops in the town centre at this time working around the clock. Unfortunately for fans to walk in St. Petersburg during the white nights, public transport is not transferred to a permanent non-stop operation: in the night from Friday to Saturday and from Saturday to Sunday are night buses, and the metro station "Admiralteyskaya" station "Sports" during the bridges drawn apart goes the night train. In addition, on the night of the festival "Scarlet sails" metro is not closed at all.

Many believe that during the white nights in St. Petersburg the night as bright as day. This is not true: for example, in the "twilight hours" in the open space without additional lighting it is difficult to read the book (unless the font is very large), but it is possible to play badminton.

Come to St Petersburg during the white nights, you have to keep in mind that late dusk and the short can cause some discomfort. First, during this period, many people in the evening forgetting the time, not being able to navigate by the sun". So, if you go for a walk around the city, and want, for example, to catch the subway from your phone, "reminder", otherwise the night might come quickly.

In addition, the white night can be fraught with sleep disorders – not all are able to fully sleep with the lights on. In such cases, saving blackout curtains and "adjustment" personal graphics for daylight hours. If you have difficulty falling asleep – it is best to go to bed just after midnight, when the twilight is just beginning to occur, and the illumination may not much but still is on the decline.