How to choose the Internet speed

With the advent of technology in communications, the transmission speed has reached a new level. Fiber optic cables capable of providing insane data transfer speeds. Often it turns out that high speed is not justified and worth the extra money. It is important not to fall for marketing providers and decide what exactly you need. 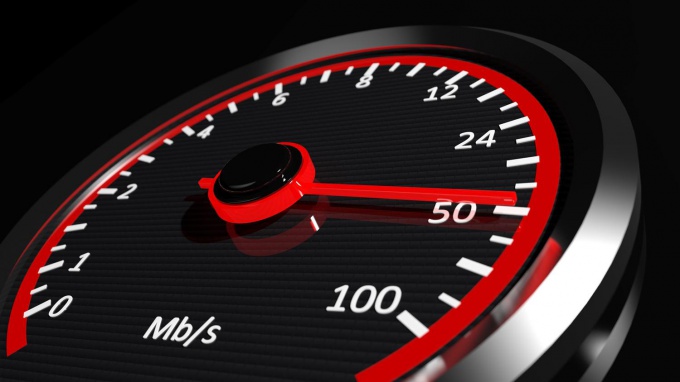 In order to take into account all the nuances when choosing a fare on the Internet, you need to know a few facts about network operating principles that will help you to use the services more efficiently.

Megabit and megabyte are two different things. 1 Mbps is approximately 8 times more than 1 MB/sec. It turns out that having the Internet speed 8 Mbit/sec, we obtain a real rate of about 1 Mbyte/sec. Music track is of size 5 MB download (fully or see) for 5 seconds. Thus, knowing their needs in the network, one can calculate the time that will execute a particular task at the current rate.

The final speed of the Internet is determined not only by your ISP. On its performance the most important influence factors, such as network equipment, the speed of the remote server, the wireless signal, speed of the target device and so on. If your provider proudly announces 50 megabits per second, while watching movies online you just don't get that speed, because the computer with the movie somewhere. Server downloaded distribution of this film to several thousands, and even tens of thousands of users.

This is comparable to a wide pipe through which flows a small stream: the source (server) more are not able to give, and all the extra space empty. A similar situation occurs if you are with the tablet through 2 walls and a layer of furniture from the router - speed Wi-Fi channel will fall, and no matter how fast Internet to your house has not been received, to the device he will be there at lower speeds.

An important indicator of the quality of communication - ping. In fact, ping is the speed of data access on the Internet, i.e. how fast is the query. If at high speed the ping is large, it will not grow: the queries will be slow. Particularly negative high ping affects normal web surfing, where each click is a request, as well as on online games where the ping depends on the synchronicity of what is happening in real time.

One of the most frequent and demanding user tasks - online video. If the music's not so important, because the size compositions is small, then with the video you should always pay attention to the capacity in which you watch it. The higher the quality the slower buffering (primary testing) of a film or video. For example, the quality of 480p requires almost twice lower speed compared to 1080, although many reputable sites automatically set the video quality, so the problem was not so significant.

Torrents - the best speed test. Here, as servers are the computers of the users, and upload speed information on your computer is aggregated for all servers. As a result the overall rate of return can be very large, capable of loading any Internet channel.

Considering all these factors, it is possible to make the following recommendations.

Given the average requirements of the Internet users in modern conditions of Internet speed of 15-20 Mbps is sufficient for almost all tasks. Often, large numbers enter users into believing, as if promising that "everything will be fast." But providers know that used to be only a quarter of those 60 Mbps, so in fact You put 15-20 Mbps at a price of 60. Most often the difference is felt only when running torrent clients, but for most users this is hardly worth the overpayment.