How to play the game "pirate Treasure" 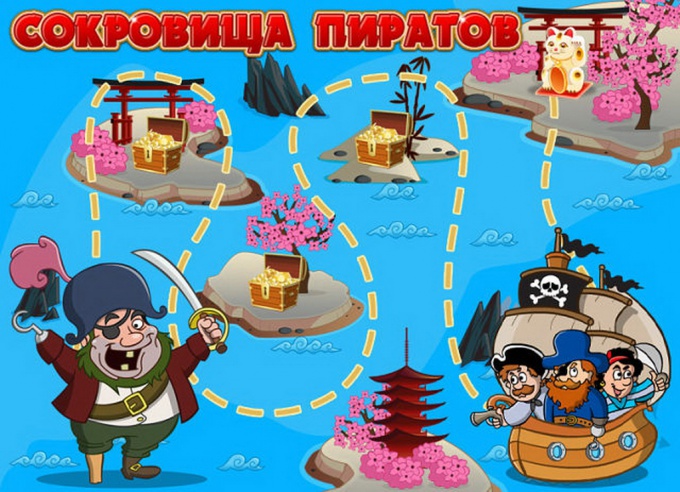 The process of the game

The genre of the game "pirate Treasure" is called "three in a row." The player is given a small field in which the stones of different colors and shapes. It is necessary to collect a series of at least three gems of the same color, the more stones in a row going in, the better.

But need to collect the stones that are marked "black mark". To pass each level you must collect a certain number of these stones. The difficulty lies in the fact that the number of moves a player has is limited. Having collected 3 jewels in a row, the player receives only the points. Collecting 4 stones, the player gets a lightning that breaks all the stones vertically or horizontally. In order to collect all the gems on horizontal and vertical planes, the player needs to break the angle of the stones. Collected 5 gems in a row the player will get the most desired bonus — the crystal star. She can break all the stones of the same color on the whole playing field.

Why the need for gold coins in the game "pirate Treasure"

For the level you are given stars. Once you have collected three stars, the player will be able to open the pirate chest, which will find a certain number of gold coins. For these gold coins the player can buy some bonuses. So, reaching the eighth level for 300 gold coins to purchase the hammer. The hammer smashes one stone on the playing field. After tenth level, opens the ability to buy such a bonus, like a whirlwind. Whirlwind shuffles all the stones on the field. It should be used in that case, if no good moves. The vortex can buy, spending 400 gold coins. Reaching 15th level, the player can for 500 coins to buy the lightning. Bonus zipper splits the straight line of stones, which the player chooses.

Obstacles in the game "pirate Treasure" and overcoming them. The first obstacle to be faced by the player is the ice. The ice can't move along with the stones. To destroy it, you need to break up the stones under him. The second obstacle will be the usual box. This obstacle can be easily overcome. In order to break it, you need next to the box to collect a number of stones. Another obstacle is the mud bubble that cannot be destroyed. It is also able to produce new dirt, making it more difficult passing game "pirates Treasure".

The chain is also a barrier, holding one of the stones. Break the chain by collecting stones near it of the same color. Crab and octopus are also monsters that plague the player. Crab can block only the stone on which he sits, and the octopus blocks 4 stones. Blowing up a number of stones with crab, the player will destroy him. To kill an octopus is more complicated. You need to blow up the rocks with his tentacles, and they had 12 pieces.