What liquid to pour in power steering

Replacement of fluid power steering — an issue that concerns many motorists. When alone operation, the main thing is to clearly know what kind of oil need to buy, and to imagine the methods of replacement. 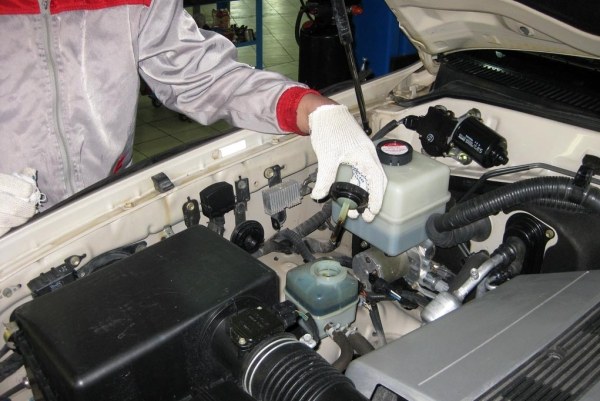 Related articles:
Most modern cars are equipped with power steering. This is due to practicality and ease of operation by the machine on which this mechanism is installed. The name of the host vehicle suggests that its proper operation depends on cleanliness and a sufficient level of oil. However, as practice shows, not every ATF is suitable for refilling the power steering. For normal operation of all its parts requires an individual approach to each individual model.

The main types of oil for power steering

There are two types of most common fluids designed for WTP: and Dexron Pentosin. The first of them is made in Germany. It is used by most European car manufacturers. The second option preferred by Eastern manufacturers (Japan, Korea, China).

This oil is usually red and often can be used for power steering and transmission. The Pentosin fluid is usually green and is intended solely for use in the power steering system. There are butter yellow color, but they are rare and used typically for vehicles of the brand Mercedes.

In composition to distinguish between mineral and synthetic oil. Mix them up in any case is not recommended. Many motorists still debate about which one is better.

Since most of the parts of the steering are made of rubber, and synthetic oil is chemically aggressive, they can disrupt the normal operation of the system. The only option that is really important is the use of such liquids is the use of Gurov, component parts which are created specifically for the performance of its functions in such an environment.

Therefore, if the user is specifically not allowed to use synthetic oil, use only mineral. Yellow and red liquid can be mixed with each other. Green with any other impossible. Prohibited the simultaneous use of two different composition of oils.

Update time fluid WTP can differ significantly. It all depends on the type and modification of power steering. Usually oil for Gur it is advisable to change approximately every 40-50 km. You need to use ATF to its darkening and the appearance of an unpleasant burnt smell. This parameter helps to determine if you've lost count of the kilometers.

If you upgrade the oil to the SMR in the home should:
- set status and the amount remaining in the fluid system;
- to determine its type;
- with a syringe to produce pumping out the old oil and fill new;
- bleed the system in place standing on the machine to facilitate steering it is better to put something under the wheels).

The operation of the power directly depends on observance of rules of its operation. With the right usage it can last for many years without needing repair.
Is the advice useful?
See also
Присоединяйтесь к нам
New advices