Getting to the Swallow's nest in Crimea

Swallow's nest is a very picturesque place on the Peninsula of Crimea, in Gaspra village. And built this miniature castle was in the second half of the XIX century. Swallow's nest is right on the Aurora cliff with a height of 40 meters at Cape AI-Todor. 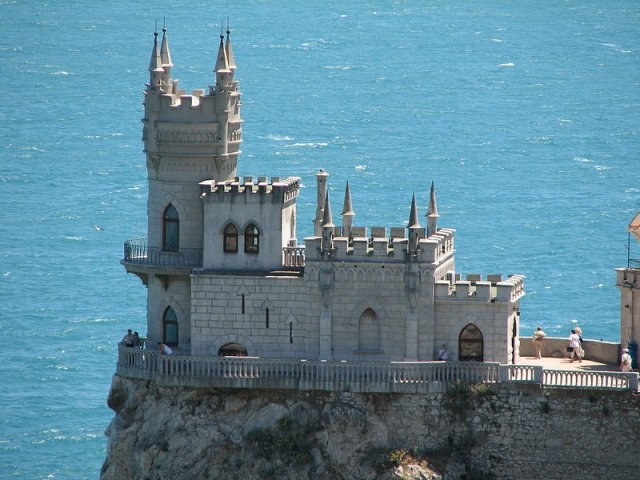 The history of Swallow's nest

In outline, the structure resembles a medieval knight's castle and is a real emblem of the southern coast of the Peninsula. The exact date of the erection of the Swallow's nest – the years of 1877-1878, when the order of architects gave the retired General of the Russian Empire, which participated in the hostilities of the Russo-Turkish war. It's a memorable scene depicted on his canvases famous painters such as Aivazovsky, Lagorio and Barrybo. But then the building was made of wood and only vaguely resembled modern.

Then swallow's nest became the property to the court physician Tobino, and then to the wife of a Moscow merchant Rachmaninoff, were also a major restructuring of the seaside villas to order a new mistress. And modern appearance, the swallow's nest received after transfer of possession to a well-known oil magnate Baron Steingel, who really loved staying on the territory of Crimea. The Baron also very fond of German buildings on the banks of the Rhine, trying to give the romantic atmosphere of Germany on Russian territory. Made the project of the famous architect Leonid Sherwood, the son of the not less famous designer Vladimir Sherwood, who designed the Historical Museum in the Russian capital.

How to get to Swallow's nest

In the current political situation when the Crimean Peninsula was incorporated into the Russian Federation, to get to his site in several ways.

Of course, the simplest of them is a flight to the airports of Sevastopol and Simferopol, where every day sent a few dozen flights from Moscow and the Northern capital. And after arrival to the village of Gaspra can be reached by taxis and Shuttle buses heading towards the city or Alupka to Yalta. Unfortunately, the village has no organized hotels, so it's best to stay in these cities, and from them by taxi or private taxi driver for a relatively small price to arrive through the villages of the Vine, Livadia, Oreanda, Gaspra to the Levant.

If you prefer to travel by rail, then unfortunately, arriving by train JSC "Russian Railways" is currently not possible. To do this, first you will need to come to Krasnodar or Novorossiysk, and from there by bus or taxi to Kerch ferry, and the ferry across the Strait.

The direct distance between Moscow and Novorossiysk – 1500 kilometers, but drivers currently will need to first get to the terminal near the village of Senna, and then "dive" on the ferry. For this, you will need to drive from the capital along Kashirskoe shosse, then on the M4, Р251 and А290.
Is the advice useful?
See also
Подписывайтесь на наш канал