How to make a sauce for dolma

Dolma is a delicious dish made with young vine leaves and minced meat. However, to use the best dolma with the sauce, able to emphasize its original taste. 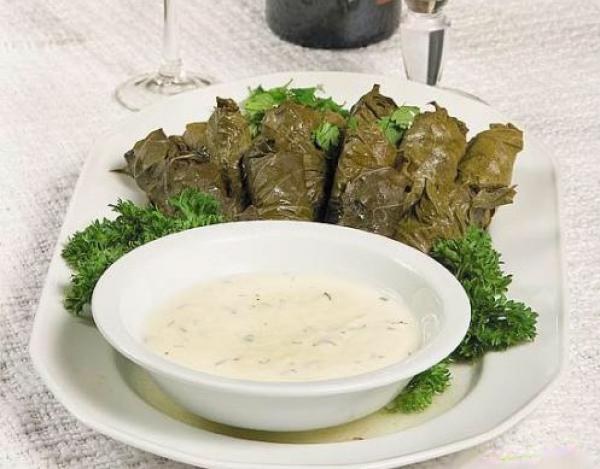 The sauce for dolma in Georgian

Dolma is a popular dish of Caucasian cuisine. It is not surprising that the most appropriate additive for him is a traditional Georgian sauce.

For preparation of the Georgian sauce for dolma you will need the following ingredients: 400 g yoghurt, 3 garlic cloves, ground cinnamon.
Matsoni is a fermented milk product specific, which is rare in Russia. If it is not possible to buy yogurt, you can use regular unsweetened yogurt. Although replacement significantly changes the taste of the sauce.

Garlic is cleaned from the skin and finely chop with a sharp knife. You should get a paste, which is mixed with yoghurt. The resulting mixture is seasoned to taste ground cinnamon. The finished sauce is recommended for 30 minutes to hold in your fridge for yogurt has absorbed the aroma of cinnamon and garlic.

Yogurt and sour cream using a blender mix until smooth. To the mixture add grated garlic, salt and black pepper to taste, and chopped dill.

Sauce for dolma with dried apricots

Most often, dolma, boiled in water and served with sauce. However, you can prepare a dish in an interesting sauce made from dried apricots. This ingredient will give the dolma a little spice and seasoning, making it taste a truly original and unforgettable.

Onions cleaned from the husk and cut into thin strips. In a deep saucepan pour the vegetable oil layer of 1 cm heat Oil and fry onion in it until Golden color.

Dolma put in a saucepan layers. Each layer pour the cooked sauce. The dish simmer until cooked. This dolma additional sauce is not needed.
Is the advice useful?
Подписывайтесь на наш канал