Pests and diseases of plum

Pests and diseases cause serious damage to the drain, is reduced, and in some cases disappears altogether, the harvest. To prevent and minimize losses, it is necessary to use special drugs and carry out a number of measures aimed at combating diseases and pests. 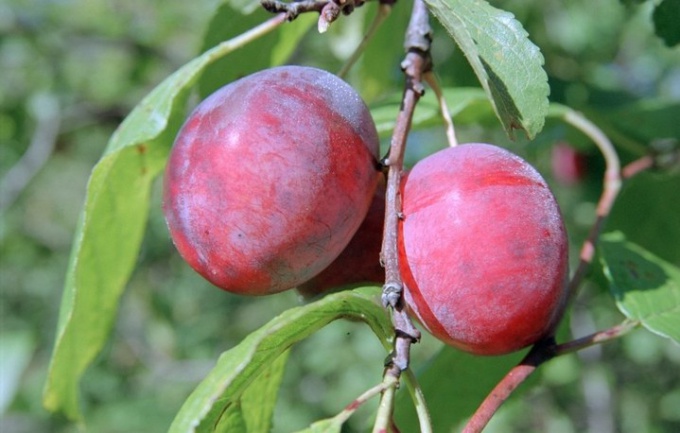 Pests of plums and how to combat them

One of the most dangerous pests that can destroy almost the whole crop is the black plum Sawfly, the adult individuals of which appear at the beginning of the plum blossom in her crown. Insects lay eggs in the calyx and buds appeared and then the larvae penetrate the ovary, damaging the flesh and the seed.

The caterpillars of the Sawfly overwinters in the soil, so one way of dealing with it is loosening and digging soil in early spring and autumn around the tree to a depth of at least ten centimeters. To destroy adult insects for a week before flowering are sprayed with organophosphorus compounds.

Another enemy of the plum, delivering a lot of trouble to growers, the plum moth. Pest butterflies lay eggs on fruit, and then hatching the caterpillars start to get into it and devour the flesh. Damaged by plum moth easily recognized by droplets of gum, speaking in place of the introduction of the caterpillar.

To get rid of pests, conduct soil digging in tree trunks and spraying the tree with a decoction of wormwood, which was prepared based on 200 g of raw material per 1 liter of water. Bathed in hot water wormwood infused during the day, then boil for half an hour and diluted with 1 liter of liquid.

Diseases of plum and methods of dealing with them

Great harm the plant causes to perforated leaf spot – a disease which the causative agent is a fungus, which affects the kidneys, branches, leaves and flowers. The fruit of a sick tree take an ugly shape, covered with brown spots. To combat the perforated spot, it is recommended to spray the plant 1% Bordeaux liquid, in the spring and summer and early fall remove affected branches.

Threat to many stone fruit crops, including plum, carries bacterial leaf spot. Plants affected by this disease, are covered with small round spots, of the fruit they resemble ulcers. The causative agent is bacteria overwintering in buds and branches, so to deal with it in the fall to spray the tree a 3% solution of Bordeaux fluid. In addition, it is recommended to collect the fallen leaves and burn them.

Most dangerous is the marsupial disease, also known as pocket plums or plum hollow. In fruit affected by this disease, bone is not formed, they expand in the fleshy part, thus acquiring the shape of the bag.

To cure plum from marsupials of the disease in early spring before flowering and in autumn she sprayed a 3% solution of Bordeaux fluid. After flowering, the tree should be treated with fungicides.
Is the advice useful?
See also
Присоединяйтесь к нам
New advices