"Dubrovsky" Pushkin: the story and history of creation

Pushkin's novel about Vladimir Dubrovsky became a reflection of social and moral stratification of Russians of that time. "Dubrovsky" is included in the school curriculum in literature and a genuine interest most students. Moreover, critics of modernity do not get tired to discuss this product. 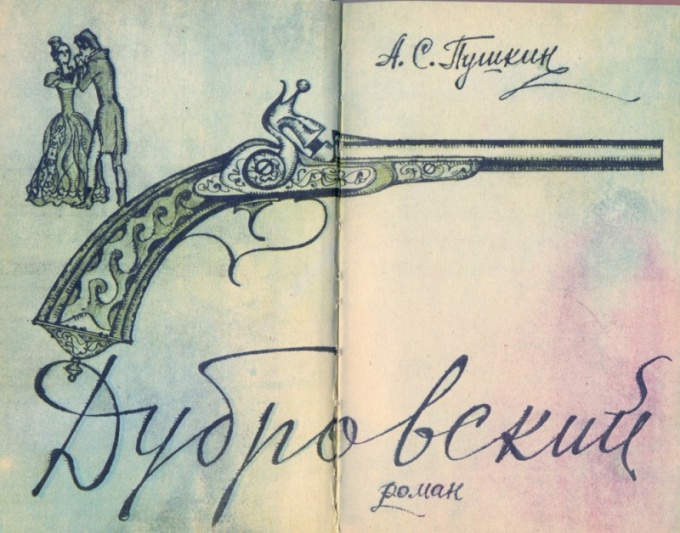 Related articles:
This work of the great Russian classic about the descendants of two feuding landlords ' families remained unfinished, was not prepared for publication, the manuscript was left notes and observations of the author, and do not even have a name. But, nevertheless, this is the novel to this day is considered one of the most famous works of the thieves in the Russian language.

The first publication of the novel dates back to 1841. But the product has passed the strict censorship, which has undergone significant distortion, change some parts of the novel were cut, missed. The reason for these changes were, of course, promoting free-thinking, showing a predatory chieftain as a positive hero with the ability to love, sympathize and empathize. Only many years later, in Soviet times, the reader had the opportunity to read it in full.

The history of the novel "Dubrovsky"

The basis of the novel the author put the hostility of the social strata of the country, it is very clearly expressed in his dramatic contrasting scenes of the work, mental anxieties and hero and support characters.

The idea to write a novel of such a plan came to Pushkin after he had heard from friends the story of the noble Belarusian descent Ostrovsky. It became the prototype of the hero, his vicissitudes of life formed the basis of the work. This story happened in 1830, when Ostrovsky was taken, his family estate and its farmers, not wishing to become the property of the new owner, chose the bandit path.

This story deeply struck Pushkin, who was an uncompromising fighter for the right of man to freedom of thought and tried to emphasize this in his works, for which he suffered persecution and disgrace.

About the plot of the novel "Dubrovsky"

The basis of the plot of the novel revolves around the fate of the protagonist. Despite the fact that Vladimir Dubrovsky endowed with such qualities as generosity, courage, kindness and honesty, his life does not develop, pursue its fatal failures and troubles.

In the narrative, the hero is not one but three vital ways – from ambitious and wasteful officer of the guard to the courageous and humble teacher Deforge, to an implacable and formidable predatory chieftain.

Losing the family home, familiar from childhood with the environment, society and lost the ability of ordinary cultural communication, the hero loses another love. At the end of the novel he is left with no choice but to go against the law, to engage in a fierce duel with the mainstream in those days, morals and values of society.

But, nevertheless, it manages to maintain the honesty, to temper the pride and to preserve the nobility not to descend to the barbarism that was inherent in the majority of robbers and bandits of the time.
Is the advice useful?
Присоединяйтесь к нам
New advices