How to train a cat

Nurseries, where engaged in training dogs, there are plenty, which is not the same institutions for cats. Because of this you might think that they are not designed for this. However, cats also succumb to taming as any other animals. 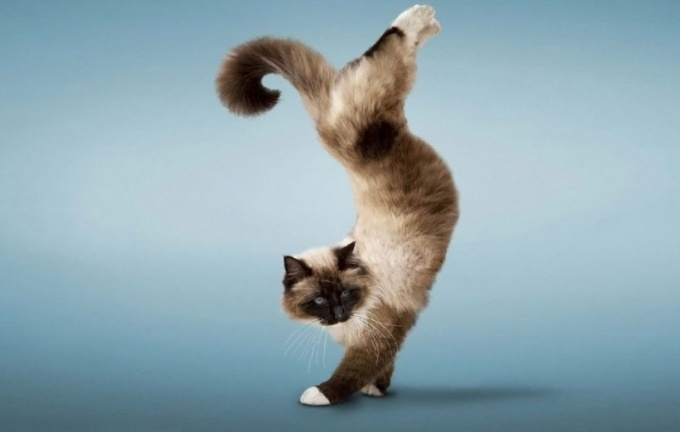 Related articles:
Train the pet to perform certain tasks at home. It is important to understand that cat training should not be a burden. If he doesn't like to do certain things, to make it will be virtually impossible. Won't help here neither persuasion nor bribery in the form of a favorite food.

In addition, if the cat will not trust you, what about the possibility of training also forget.

The optimal age for beginning training is 7-8 months. At this stage of development cats are considered old enough to understand the demands and desires of their owners.

Training cannot begin without preparation. You must observe your pet to understand his character, habits. You should also determine his favorite treats and games. All this will allow to select the optimal exercise program that will give the maximum result.

To the cat has learned the command, e.g. "sit", you need to take a treat and show it to your pet. When he is interested, calmly but firmly say the command. Repeat again and apply a little pressure to the rear paws of the cat to the animal a better idea of what he should do. The important thing is that you must have when practicing is patience. Over time, the cat will remember and sit down. When this happens, give the word a few more times and then reward the pet.

Arranging the rest in a few minutes, secure the team. Keep training until then, until the cat starts to squat without treats or your help.

Teaching the command "Give paw" should do after having studied the previous action. When the cat will sit, grab one of his legs, say the command and give the treat. As in the previous case, to perform it should be, until the pet will not himself to give you his paw.

The command "down" runs on the same principle. You only need to put pressure on the front part of the sitting cat, so he lay down, and then reward him with a treat.

However, do not overdo it. Cats differ from other animals that will not do what you do not want. Each workout should be a kind of game.

For a pet it is important to understand that when the conditions are met the owner he will be rewarded. And if not, then it is for nothing. This method of training is called "positive reinforcement".

Such training will once again show who's boss, and will increase a cat's intelligence.
Is the advice useful?
See also
Подписывайтесь на наш канал