How to change character in Minecraft

Minecraft is full of almost unlimited possibilities for gamers - within the variety of challenges it offers. Players are free to choose the sequence of actions that help them succeed in the gameplay and appearance of your character. 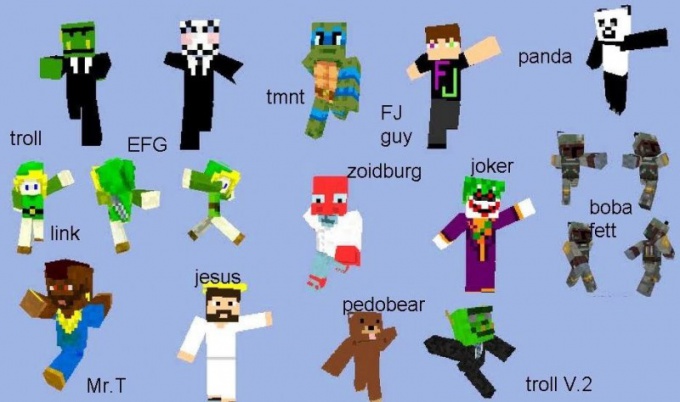 Related articles:
You will need
Instruction
1
If you a beginner in Minecraft, after check in it by default you stand in the way of a "miner" Steve - kid with light eyes and brown hair, dressed in a turquoise t-shirt and subtle blue pants. This character is very common, but because many people will quickly get bored. I wish to change it for someone else - take action depending on the specific game circumstances.
2
In order to change in Minecraft your character, you just give him another skin. When you are the happy owner of a licensed copy of this popular game, make like you is extremely easy. Go to any website offering different versions of the game appearance, select among them the one that you love, and click on available next to him the inscriptions about adding it on minecraft.net. Now this skin will be with you all the time you'll spend gameplay, on any game resources. Bored - change it as easily in one click.
3
When you have installed a pirated copy of Minecraft, change the character. There are several ways, but all of them have drawbacks. I wish to be able to change the skin in a single click - go to any pirate server. After registering there you will see different gaming options appearance. Select one click the most appropriate for you and your character in the game get the skins. However, it is likely that before the start of the gameplay you will need to install a special launcher, the installer which you will find on the same server.
4
If you do not wish to deal with pirate gaming sites use other means to change the character. Download from any resource that contains the skins, the file with those that you like. Already on your computer rename it to char.png. Then open using whatever archiver your minecraft.jar and remove in it the document with the name identical to the above. Then place in the folder where it was located your recently created file with the skin. Now in the game your character will be exactly with this appearance - but to see it, unfortunately. For the rest of the gamers you will still be Steve.
5
When this state of Affairs does not suit you, since you crave the chance to demonstrate interesting the appearance of your character to other members game multiplayer resources, we proceed somewhat differently. Search the Internet liking your skin and note carefully the spelling of the nick, with which it is associated. Now on all servers register it under that name. Your character from now on, everyone will see this as you want, but as long it's not going to change, not predict one. If the holder of the license of the account whose name you have borrowed, dare to change your character's appearance, a similar fate will await you.
Note
Even the "standard" of Steve in Minecraft there are several forms. It can appear not only in the usual blue shirt and blue pants, but in a tuxedo, in various embodiments, the tracksuits, the role of the prisoner or the Scottish kilt. Take a look: it will just be different looks - up to change skin tone (in one case, it will be dark as Africans).
Useful advice
Try - if you wish - any of the variants of skins that are specifically for different holidays release as the developers of Minecraft, and many fans of the game. For example, in the New Year you can stand in the way of Santa Claus.
Is the advice useful?
See also
Присоединяйтесь к нам
New advices