How to cook pork cheek 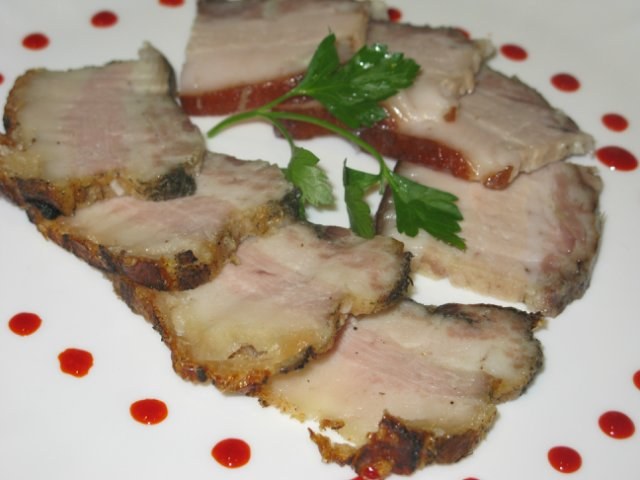 Related articles:
You will need
Instruction
1
Take pork cheek, rinse them well under cold running water. After that clean off from his cheeks skin.
2
Now take the bulb and peel them, you need the husk. Take a pot large in size, pour it in cold water, then put the whole husk. Put the saucepan on a medium heat.
3
Onion peel to put the pig cheeks. Next, add salt to taste, half a teaspoon of black pepper, the same quantity of red pepper, rosemary, thyme and coriander, 8 peas black allspice and Bay leaf.
4
Pork cheek with onion skin and seasonings bring to a boil, then simmer on very low heat for two hours.
5
After this time, carefully pick up the pork cheeks from the pan, so they are not collapsed. Let cool for five minutes. Take a few cloves of garlic, cut them into thick slices and pork lard cheeks.
6
Preheat the oven to 180oC. Prepare a baking sheet. On the tray lay baking foil, on top of which lay the pork cheek skin up.
7
Bake the pork cheeks in the oven for 30-40 minutes. After the time remove the dish from the oven and cool slightly.
8
In the course of such preparation, when the cheeks are cooked first and then baked, the dish turns out juicy with a rich taste and a soft crust. If you want to get crisp, then immediately start baking, after cooking the pork cheeks. In this case, place the seasoned cheeks in the oven for 2.5 hours, skin up, then flip and cook for 30 minutes.
9
Pork cheeks are ready, before serving, decorate them with fresh herbs. Serve pork cheek you can as cold as meats, and hot. The perfect accompaniment to this dish will be side dishes such as steamed and fresh vegetables, boiled and roast potatoes, buckwheat and rice.
Note
Pork cheeks can be bought separately, but it is much cheaper to buy a pig's head and slice the cheeks themselves.

The dish I liked the kids, before serving, put the pork cheeks and decorate the plate with fresh vegetables, the children also will not abandon the sandwiches with the delicacy.
For longer storage of food, wrap it in parchment paper.
Useful advice
To give the dish more spicy and mellow taste, make longitudinal and transverse incisions directly before baking, and then generously RUB the cheeks with salt, garlic and sprinkle with dried dill.
Is the advice useful?
Подписывайтесь на наш канал