How grow walnut to fruiting

The walnut tree belongs to the centenarians. Their age is estimated in five or more hundreds of years. And in fifty years the age of these trees are still considered young (in juvenile stage). 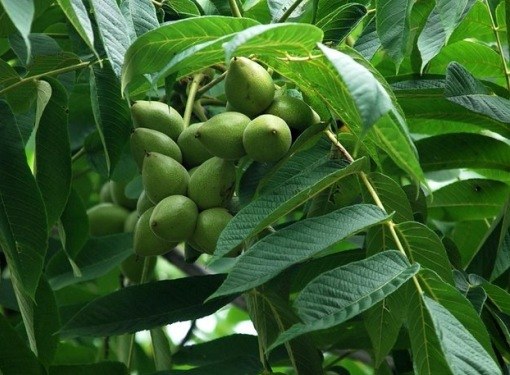 Related articles:
To bear fruit this culture generally begins in "infancy." There are three forms of walnut in culture: early, large fruited ordinary. Early form can give the first fruits after three to four years after planting.

Varieties and time of fruiting

The common walnut is one of the major fruit plants in the middle lane. Its size reaches 6 meters at the age of 6 years. And the crown expands in diameter up to 20 meters. Fifty walnut can grow to a height of 12 meters, and in some instances the circumference of the trunk at a height of one meter is more than 200 centimeters. Weight of nuts of ordinary form, average is 10-12 g.

Feature of walnut is that with age and the productivity is increased and fruit quality improved. If in the first five years of life on the tree Matures to a kilogram of nuts, the second is already more than 10 kg, and with trees older than 50 you can collect up to 100 kg of fruit.

Large-fruited forms produce fruits weighing more than 12 grams are considered more valuable because of the size of the crown and trunk from the rest are no different and features in care do not have.

Early forms have a huge advantage, short period of the fruiting stage. If the normal and large-fruited walnut begins to bear fruit for 6-7 year, the first nuts on the tree early varieties will appear twice faster. This sort of nut was discovered by scientists less than 80 years ago in Tashkent region. They bloom in the third year, come into fruition, and the following year give a tangible harvest.

The flowers of this variety are collected in the brush where you tied Matures and a few nuts. And 12 days after the first of the flowering phase comes second. If the first bloom is formed on the stem to four or more fruits, then the second – more than ten. Other forms of this symptom is absent.

To fruition as soon as possible, when planting walnut and care necessary to observe a number of conditions. Firstly, it is necessary to buy a hardy variety because walnuts freezes at temperatures below –30oC. Second, in spring green foliage of young walnut should be protected from the return of frost. Thirdly, this plant is light-loving and shade, especially in the first years after planting, may die.

Walnut is moisture-loving and dry soil will not grow. Best is soils with a high content of humus, loamy, sandy loam or sod-podzolic.
Is the advice useful?
See also
Подписывайтесь на наш канал