What fertilizers are needed for roses

To roses have grown well and blooming, they need regular and plentiful feeding. Roses love organic matter is the basis of their "prosperity". But also need the flowers and the fertilizer. 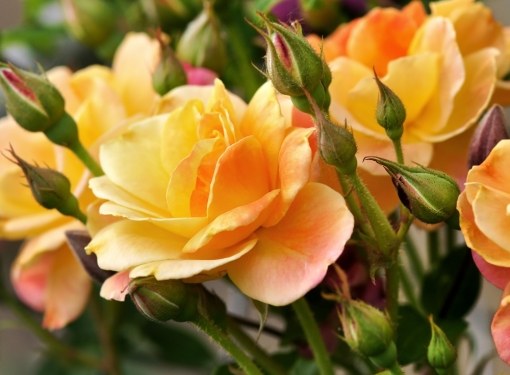 Feeding in the first year

The first fertilizers are applied during the preparation of the site for the roses. In autumn the soil is dug up to 60 cm in depth and introducing organics at digging. To plant roses you can start at the end of April. At the bottom of each hole prepared for the bushes, is added about 0.5 kg of well-rotted manure.

Further feeding begin in the summer of liquid organic fertilizers. The best food for young roses is the slurry that contains all the necessary plant at this stage of development substances. Do 3-4 feedings per season, starting in June, every two to three weeks. A solution is prepared from mullein with water in proportion 1:3. It should stir and leave to infuse for 10 days, and before feeding again diluted with water 1:10. Before fertilizing the soil under the bushes watered, then make 3 l of the nutrient solution on every Bush.

The mixture for feeding of young rose bushes planted in the current year, the mineral elements to make not recommended. But in order that the nutrients are not wasted, you need to remove wild growth emerging from the parent plant, cutting it at the base.

In the first year should be avoided and early flowering young roses for the same reason – they need to gain strength and nutrients for flowering next year. All season, until the beginning of August, tying the buds with the bushes removed. Leave only 1-2 flower to each shoot that in the fall they began a fruit. Then the bushes will ripen better, and next year will bloom more profusely.

Caring for roses in the second year

Planting of the second year and subsequent years usually bloom several times during the growing season. At the end of each part of the flowering shoots should be cut, provide the following flowering.

The soil under the bushes twice a month loosened to a depth of 10 cm, to give roots access to oxygen. Two times during the season dig over the whole plot, to a depth of up to 25 cm for the First time this is done after the opening of the rose, the second in late summer. Watering roses need regular and plentiful. In hot weather it is held weekly. It is particularly important that moisture of the plant was sufficient in the period of growth and formation of buds. Keep moisture in the ground round after watering helps mulching with humus or peat.

Fertilizing starting in spring of the second year, are held regularly. At this time, already made and organic, and mineral fertilizers. To apply for fertilizing may be the same composition as for annual landings. But it is better to use instead of mullein humus and be sure to add it on each Bush is 10 mg of potash and phosphate fertilizers.
Is the advice useful?
Присоединяйтесь к нам
New advices