Who needs to give Lily

More than a century, the amazing beauty of the lilies admired people. The representatives of the ancient civilizations – the Egyptians and the Greeks considered it a symbol of freedom, hope and rebirth. In the middle ages, the Lily has gained the status of a Royal flower, and has been actively used in heraldry. White Lily is a symbol of purity and innocence and the very flower of the virgin Mary. 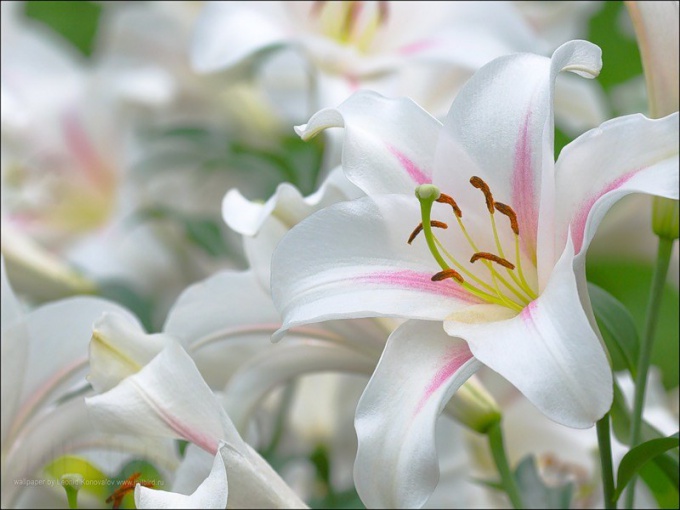 Which lilies to choose for gift

A gentle word "Lily" brings to mind the image of a proud and stately plant with spectacular fragrant flowers. It is one of the leading places in floristry and landscape design, thanks to the huge variety of shapes and colors. There are about 4000 different varieties of lilies, and their number each year continues to grow.

One of the main advantages of a Lily is its versatility. Exquisite bouquet of lilies to give to his girlfriend and work colleague, man and woman, to present at wedding and anniversary celebrations.

White lilies is the perfect gift for your girlfriend. As a symbol of purity and innocence, they can give and a teenage girl, and a happy bride. By the way, the tradition of giving wedding white lilies existed in Ancient Russia. Bright and extravagant young minx might like a bouquet of fiery red roses.

When choosing lilies for your bouquet, you should take into account the symbolic meaning of their colors and shades. For example, a fairly rare blue Lily is considered a symbol of spiritual nobility, tiger – wealth and prosperity, and yellow alludes to the fact that the giver is trying to attract favorable attention.

A bouquet of lilies can be presented as a gift to a young mother, as, according to the Greek mythology, the Lily was given to people the wife of Zeus, the Hero, was considered the patroness of marriage and motherhood. Tiger lilies will be beneficial to look in the bouquet designed for the ladies elegant age.

Lilies in the house

For a long time lilies have been relegated to the background an extremely popular rose, but today they returned to the old "Royal" status. And yet, before you put in the room fresh flowers, be aware that the scent of lilies in high concentration may cause headache. So it will often ventilate the area or choose lilies with a delicate, subtle flavor. Breeders managed to bring and the flowers that have no smell.

Lily is considered the flower of strong, vigorous and self-confident people. They say that it can influence the person to help him find inner harmony. Lily improve the psychological atmosphere in the home and family, drawing positive emotions and good energy. By the way, in addition to cut flowers, you can put in the house and potted lilies.
Is the advice useful?
See also
Присоединяйтесь к нам
New advices