The types of plugs and how to use them

A description of some types of forks: dinner, salad, dessert, fish. How to use a fork for eating meat, fish dishes, salads and desserts. The rules of etiquette. 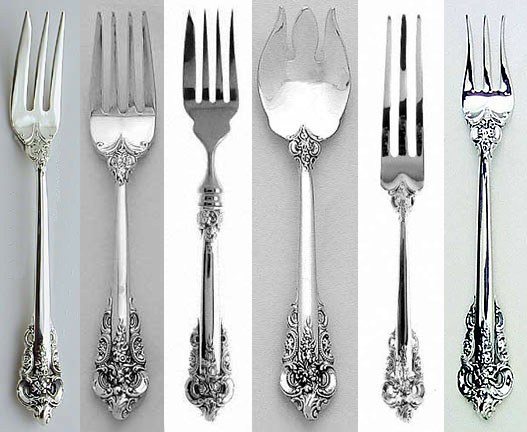 Related articles:
A fork appeared in the dining everyday life of Europeans in the 15th century. Prior to that, and kings, and slaves partook of food with spoons, knives and their own hands. The first forks were flat, two-pronged and quite uncomfortable. Gradually acquiring modern form, the Cutlery with teeth became "overgrown" with a lot of modifications: there were forks for desserts, fish, salads and other dishes.

A dining fork is a fork with four tines, designed for human dishes. Served in a pair with a kitchen knife. Dining fork take the left hand and the knife in the right. In order to separate the meat from the main piece fork turn curved side up and at a slight angle to stick into the meat. With a knife cut a piece and send it with a fork in my mouth. To take off a plate garnish, a fork turn the curved side down and used as a spoon, helping himself with a knife.

Fork for fish less dining. It is equipped with four or three flat prongs. Sometimes two pairs of teeth parts in the middle of a shallow dent. In good restaurants the fish is a fish knife, in its absence, for human consumption fish used two forks. If you have a solid piece of fish, push it with one fork to the plate, and a second fork, separate the fish meat from the bones. After eating this piece, turn the piece to the other side and repeat the process. Ideally, after you eat a dish on the plate should remain neat fish skeleton.

Salad forks have four tines and a wide base. This form gave a plug specifically so that with its help it was possible to eat salads of different types. It is served salad fork salad knife. Use a salad fork as well as dining: turn curved side up, and injected in large chunks or sheets, slicing them with a knife. When served the salad with a fine thread, and the plug used as a spoon.

The dessert fork is the smallest size fork with two or three shorter denticles. Distinguish the dessert fork is suitable for pies, cakes and pastries, and a special two-pronged fork for fruit. If dessert knife is not served, the dessert fork is held in the right hand: separate the edge of the fork pieces of the dessert, prick and put them in his mouth. During the cocktail fork is used for baking the unit with extreme wide pointed tooth. These tine cut off pieces of pastry, like a knife, holding a plate of dessert in one hand.
Is the advice useful?
See also
Подписывайтесь на наш канал