What are the benefits of mother-heroine

The honorary title "Mother-Heroine" and the eponymous award was introduced in the USSR in 1944 and disappeared from circulation with the end of the era of the Soviet Union. Together with them did not and the many benefits to mothers who gave birth and raised ten or more children. Seventy years later in Russia, spoke about the return of the mothers of these titles and privileges, reducing required to achieve the number of children twice. 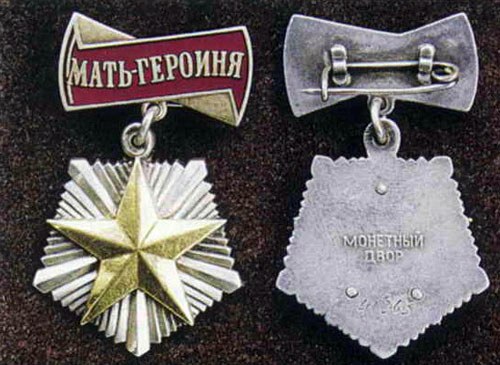 Russia, becoming the successor of the Soviet Union, about mothers having many children at once somehow forgot and truly remembered recently, faced with the demographic crisis under the title "Women don't want to give birth, primarily due to the difficult economic situation. Replaced the "Mother-Heroine" the order "Parental glory", awarded, unlike the Soviet counterpart to both parents. Another difference of "Glory" is what they reward families in which not ten, but four children. And, most importantly, its complement is not the most serious, according to experts, benefits.

So, containing a few children, parents have the right to pay 50% of utilities and the city phone, the extraordinary setting of the latter, to reduce the amount of net income, earlier retirement (although subject to develop a specific experience), saving mothers ' employment. For children there is a discount of 50% to pay for kindergarten, free travel in municipal public transport, free medical treatment in government hospitals, free summer holidays in children camps and some privileges when entering universities. Which, given the current realities often remain on paper. However, in the regions has its own program of assistance to large families. For example, in Altai Krai " parents don't need to pay for the acquisition in pharmacies of medications designed for preschoolers. Children from such families also have priority for admission to kindergarten and trips to the country camp.

A bill providing for the restoration of Russian title and the order "Mother-Heroine", in 2013 began to consider the State Duma of the Russian Federation. In the document, in particular, provides that the primary basis for award will be the presence in the family is not less of five children ranging in age from one year to five years. And the benefits to mothers of many children will have become, in the words of one of the authors of the bill Mikhail Serdyuk, no less significant than those in the Soviet Union.

Began with the letter "A"

Heroic rank and annexed to it the order appeared in the USSR of July 8, 1944, almost a year before the end of the great Patriotic war. Irretrievably lost millions of men, most of whom were young, then, too, the country was on the edge of a demographic abyss. With the release of her could be the promotion of Soviet women to give birth as often as possible, including providing them with major social benefits. And in the autumn of 1944 in Moscow took place the awarding of the first 14 mothers who had given birth and raised at least ten children.

It is symbolic that the order number 1 gave the woman a name that begins with the letter "A" — resident of the Moscow region Aleksahina Anna, the mother of 12 children. Eight sons of Anna Savelyevna became participants of the great Patriotic war, half of them never returned home. Subsequently, the order of Aleksahina her children transferred to the State historical Museum. By the way, at the same time with the order "Mother-Heroine", there were two large awards of Soviet women — medal of Motherhood (birth to five or six children) and the order of "Maternal glory" (seven to nine).

In addition to their own children, including those killed or missing during the fighting, serving in the army or the police in the rescue of human life or died due to occupational diseases and employment injuries, the government took into account those mothers adopted. The Soviet government is to pay tribute to their financial obligations, it has carried out rigorously. All women awarded the title "Heroine Mother" were allocated to individual apartments in multi-cities or home in the countryside, were paid monthly allowances. And their children had the opportunity to get a good education and profession.

Not been deprived of attention by the government, for example, a music family of the Irkutsk Ovechkina. Head of her mother-heroine Nina Sergeevna was raised alone, 11 children, created the famous almost for the entire Union family ensemble "Seven Simeonov". That, however, did not prevent them almost entirely to make a particularly serious crime and try to steal abroad civilian aircraft.

Historians claim that the recent awards of the Soviet mothers in November 1991, awarded by the President of going into oblivion of the USSR Mikhail Gorbachev. However, in the Russian media from time to time publish materials, which is quite unique and not very believable-looking fact that in the early 90s, the order "Mother Heroine" and encouraged another person. And — a man named Veniamin Makarov, brought up in their Ekaterinburg apartment, came in the form of state benefits, a few dozen foster boys from the street and from orphanages. By the way, one of them a Makarov because this apartment is now suing.
Is the advice useful?
See also
Присоединяйтесь к нам
New advices