How to check the suitability of the generator 2107

Lost charger or audible whistling from the generator? Then you have to hold a series of events that will identify the fault and eliminate it. The simplest failure is the brushes wear or breakdown of the relay-regulator. She eliminated replacement of the brush unit, needs removal of generator no. 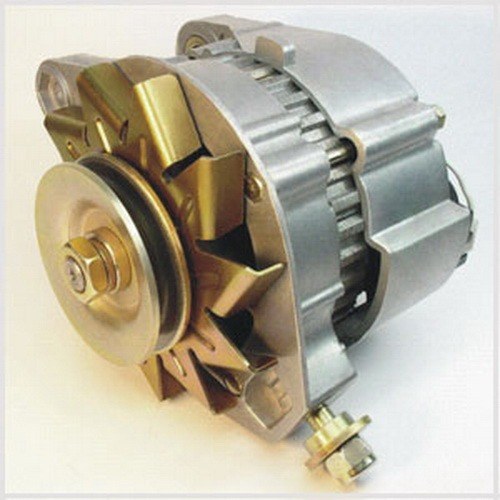 Related articles:
In the car VAZ 2107 two sources of supply – the battery that powers the system when the engine is stopped, and the generator provides current of all circuits with the engine running, plus it charges the battery. Without battery, you can go, to have only the tug will have to turn on the terminals of the load. But without a generator for a long time not to drive.

On sevens, the generator has three power windings, they are connected according to the scheme "star". That is, the start windings are connected together and the ends removed AC three-phase voltage. Yes, that's three phases gives our generator. And in order to obtain a constant voltage, a semiconductor rectifier includes six diodes.

So, any trouble, lit up the lamp on the dash, the battery does not light up. What to do? The first thing to note on the strap. It's possible that he's just weakened and the generator pulley does not scroll. To remedy the situation, you just have to tighten the strap. The second thing that is obvious is the oxidation of contacts. Carefully inspect the relay-regulator, it goes to a single wire that can be oxidized. From this and my phone is charging.

Lamp does not illuminate, and the battery loses its charge? The belt is tensioned all the rules? Will have to disassemble the dash and replace the bulb. Either it was burned or broken wiring. Common failure is the blurring of the brushes or the breakdown of the relay-regulator. Structurally, these two elements are United in one body, in case of breakage, only to replace them with new ones. The breakdown of one or more diodes will also lead to a lack of charging.

Mechanics is not eternal, if he heard the whistle from the generator, it is possible to say one thing – failed bearing on the front cover. Usually it breaks from excessive belt tension. Therefore, when adjusting be sure that he was stretched adequately. Too strong interference leads to a very rapid wear of the bearing, and too weak, as mentioned earlier, the lack of charging.

Replace the relay-regulator is the easiest thing. It is sufficient to Unscrew the two bolts to remove the regulator, put the new in and tighten. Have just disconnect the negative terminal, the generator should not be removed. But if the failure is in the bearing or the diode bridge, you will need to completely remove the alternator and disassemble it. Remember that when you work make sure to disconnect the battery.

Alternator mounting from the top (on the bracket, and is used to secure the belt tension) and bottom (engine block). Demolition is the dismantling of the pulley, the front and rear covers, anchors, semiconductor diodes. In the front cover bearing mounted with plates to be brought out when performing the replacement. Will have to knock out the bearing using a piece of tubing of suitable diameter. Try not to overdo it, postukivanie gently with a hammer to evenly out of the bearing from its seat.

To check the diode bridge will have to unsolder each semiconductor. Basic continuity test with a tester or if there are none, with the lamp and the constant current source. Semiconductor – an element that conducts electricity in one direction. First connect plus on the anode and minus on the cathode. Then change the position of the wires. In one case, the current must pass, and the other not (or it will be some resistance). Having identified the faulty diode, it should be replaced.
Is the advice useful?
See also
Подписывайтесь на наш канал