What to do if the laptop screen appeared strip

The laptop is a single unit, which in most cases is rather difficult to diagnose and repair, especially if on his screen appeared strip. 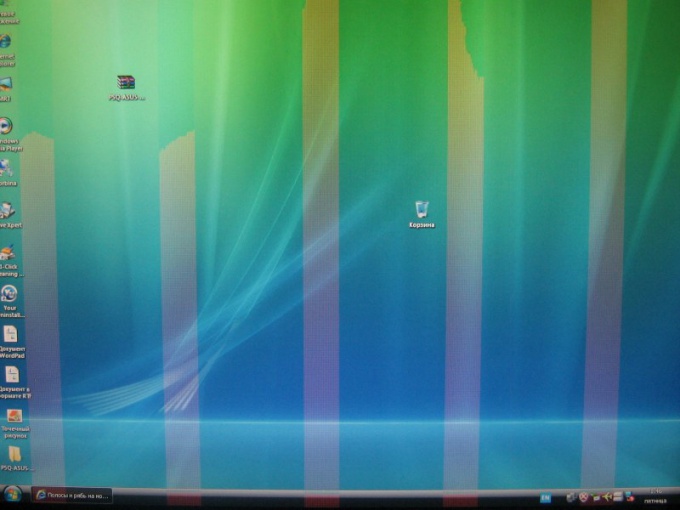 Causes of stripes on the screen

There are several reasons in which at the laptop screen may appear streaks. For example, it may be associated with the matrix, namely its breakdown. Although the matrix of the laptop is expensive, but in this case, either have it replaced or buy a new laptop. The cause of the fault may lie in the damage of the special train that goes directly from the laptop to his Board. If none of this is the cause of the stripes, then most likely it lies in the components that are installed on the laptop. This can occur due to faults like the graphics card and the motherboard of the laptop. If the problem is with the video card, then it can be solved either by replacement or with repair. With regard to faults with the motherboard, as a rule, the lines on the screen are the result of overheating of components and directly of the motherboard.

How to get rid of lines on the screen?

Unfortunately, in order to get rid of immediate problems, will need the help of experts, which can be found in the service center. Of course, each owner of the laptop can turn for help, for example, to the familiar, but to solve this problem, we need to observe a number of different nuances. First, the user will need to install the specific cause streaks on the screen.

To install it, you need to connect a laptop to a regular monitor through a special cable, which is usually either bundled with the computer itself or with the video card. If after connecting the monitor to the laptop the image appears without different lanes, then the problem is either in the plume or in the matrix of the laptop. If streaks remain, then the laptop will have to change either the motherboard or the graphics card. To diagnose that it is impossible, therefore, most likely, will have to carry the laptop in a special service center or buy a new one.

If the bands on the monitor is not, then you need to check the response matrix notebook the physical effects. The device owner should press your fingers on the screen (this must be done carefully so as not to damage the matrix even more) and see are stripes on the screen. If so, then really faulty either the matrix or trail. To determine what you want to watch lost these strips when opening and closing the lid of the laptop. This must be done slowly and quickly. The changes in any way indicate a problem directly related to the loop matrix.
Is the advice useful?
See also
Присоединяйтесь к нам
New advices