One of the most important and magnificent holidays of the Armenians is the wedding. Armenian culture is rich in traditions and customs, and chief among them is the tradition of the wedding. They were handed down from generation to generation for hundreds of years. Modernity has imposed upon them its mark, but things have come to this day almost unchanged. 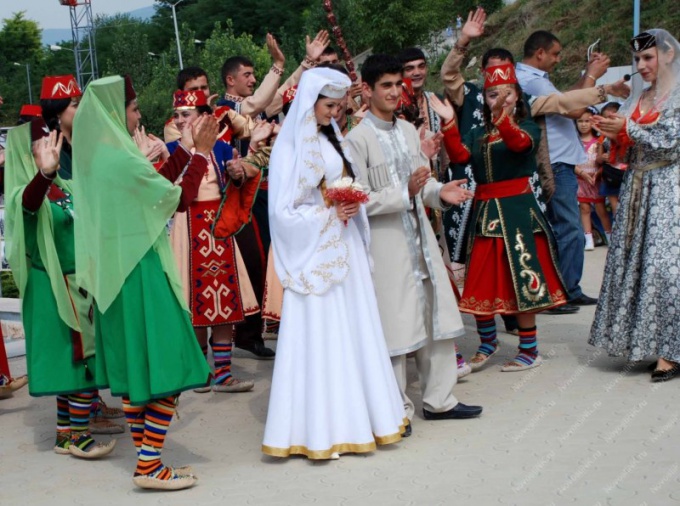 Before the bride was chosen by parents, or rather mother of the groom. Parents tried to make it so that the bridegroom could see the bride before the wedding. Selecting the right girl, the parents searched the mediator – relative, which was well received in the family of the girl.

The duties of the mediator entered the negotiations with the girl's family to obtain consent for the wedding. Now the morals have changed and the groom himself may choose his bride. In turn, the girl decides to be or not to be a wedding.

The tradition to send the matchmakers has not changed its value today. If the mediator talks ended with the agreement that after a few days in the girl's family went matchmakers. Before the bridegroom could not attend in the delegation. Part of matchmakers include men on the paternal side, and often the groom's mother.

The two men began a conversation from afar. First discussed topics not related to the wedding. Then, in allegorical form, the two men were told the purpose of his arrival: came to take a flower from your ashes. There are many options.

It was considered bad form, if the bride's parents immediately agree to the wedding. Usually the bride's father, if agreed to, requested time for reflection. The Declaration of consent also occurs in allegorical form. After that, by tradition, the table was laid, and the young drank brandy or vodka.

Now the date of the engagement and all of its conventions are agreed even on the matchmaking. On the agreed day at the groom's house are all close relatives. All guests bring gifts to the bride. The father of the groom in this day of the killing of a calf or sheep.

At bride's table. Guests from both sides sit down at the table. The groom gives the bride a ring. Guests give toasts with wishes of happiness to young. The bridegroom promises that he will do everything to fulfill all wishes. The bride, silently, thanked and passes his wine glass to his father. After this starts the presentation of gifts to the bride. Usually towards the end of the feast the parents of the bride and groom stipulate the day of the wedding.

Favorable time, as before, is the autumn. But today in Vogue summer wedding.

On the eve of the holiday is decorating the bride's house, where you must keep the carpeting. Her young will be the car that will take them to the ceremony.

Modern Armenian wedding has not lost its fluffiness over time. The duration of the festivities can be two and seven days. The bride and groom are allowed to dance only one dance, during which numerous guests showered them with money.

In Armenian wedding traditions, and similar to Russian customs. These include loaf. The Armenians, it was replaced with pita bread, but the meaning of this ceremony remains the same. The only difference is that Armenians have not decided to compete, who will be the master of the house – the primacy of men is undeniable.

At the end of the ceremony is the presentation of gifts to the young. Basically, give money and jewelry.

Armenian wedding is still accompanied by a huge number of traditions and rituals, that list is just not possible. Some practices, such as bathing of the bride and groom are gone, some alive to this day.
Is the advice useful?
Подписывайтесь на наш канал